Lawyers and legal workers in the first quarter reached their highest employment levels since the pandemic began, according to the Bureau of Labor Statistics, inching closer to a full recovery. And while there were some negative points in the quarterly employment data, legal employment in the first quarter continued the overall positive trend that closed out 2021.

Though the 1.89 million jobs in the legal sector haven’t eclipsed the pre-pandemic Q4 2019 total of 2 million, they have surpassed legal employment figures from relatively recent pre-pandemic quarters, such as Q4 2018 and Q1 2019 (1.85 million and 1.87 million, respectively). This may signal that the legal field is nearing a complete recovery from the pandemic—or at least adapting to new realities of the workplace.

While overall legal employment numbers reflected growth in the industry, unemployment figures from the first quarter show that there is likely still room for the industry to grow. Unemployment rates stayed steady for lawyers, maintaining a pandemic-low 0.8% from Q4 2021 to Q1 2022, but they increased for legal support roles (from 0.5% to 2.2%) and paralegals (from 2.4% to 3.8%). 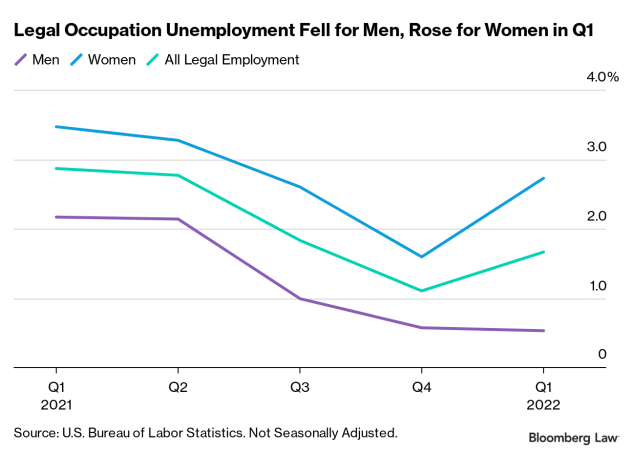 The increased (or steady) unemployment rates, coupled with growth in employment levels, likely indicate that more people are re-entering the legal workforce and looking for jobs.

Similar to previous quarters, the legal field’s return to office was likely impacted by Covid-19 infection levels, as the omicron variant’s surge correlated with increased legal telework for parts of Q1. The percentage of legal employees indicating that they teleworked at some point in the last four weeks due to the pandemic rose from 27% in December to 39% in January, and remained high at 35% in February before falling back to 27% in March. 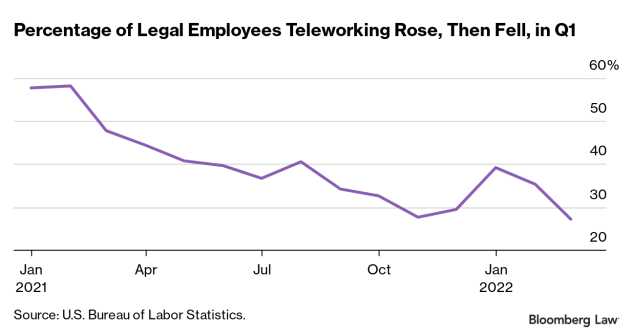 This statistical volatility may indicate that while the legal industry is recovering, it is still sensitive to surges and spikes in Covid transmission. It’s something to keep an eye on, because another more sustained surge—one that could keep lawyers and legal professionals out of the office for a longer period—may have a greater impact on the industry as a whole.

Bloomberg Law subscribers can find related content on our In Focus: Legal Operations and In Focus: Lawyer Development pages.

If you’re reading this on the Bloomberg Terminal, please run BLAW OUT <GO> in order to access the hyperlinked content or click here to view the web version of this article.

Mon Apr 18 , 2022
Manufacturing employees have a hand in everything that our country produces. Naturally, manufacturers want to know their employees are reliable and trustworthy. Manufacturers are taking steps, including background checks, to ensure a single hire does not inadvertently cause liability. Manufacturers have other reasons to want to know about their workers. […]