The Kansas Reflector welcomes opinion pieces from writers who share our goal of widening the conversation about how public policies affect the day-to-day lives of people throughout our state. Huascar Medina is the poet laureate of Kansas.

On Feb. 22, HB 2717 was introduced in the Kansas House of Representatives. By April 11, the bill became law. In 70 days, the state of Kansas was able to endanger and alienate immigrants, their families, friends and allies by embracing white supremacist ideologies like xenophobia and racism.

Fear is one hell of a motivator, especially during election season.

I’ve followed HB 2717 since its introduction for multiple reasons. I wondered If Trump-era racist and xenophobic propaganda would metastasize and infect local government in Kansas. Which state senators would support anti-immigrant legislation? What local law enforcement agencies would sign up to participate in federally sanctioned racial profiling?

The legislation keeps municipalities from enacting, implementing or enforcing ordinances, resolutions, rules or policies that prohibit or restrict law enforcement officers, local officials and local government employees from taking action with regard to an individual’s citizenship or immigration status, lawful or unlawful.

Any local government employee can share your information with any local, state or federal official. If they question your immigration status, they can communicate with the Department of Homeland Security.

The Kansas Legislative Research Department summarized HB 2717, stating: “The bill makes the use of racial or other biased-based policing for the enforcement of federal immigration law and communications with federal agencies unlawful.” Followed by: “The bill uses existing law to define ‘racial or other biased-based policing’ as the unreasonable use of race, ethnicity, national origin, gender, or religion by a law enforcement officer in deciding to initiate an enforcement action.”

What do they consider unreasonable? Who decides what is reasonable?

This type of policing is not considered racial profiling when an individual’s identifying factors like race, ethnicity, and national origin are combined to initiate an enforcement action. As a Brown, Hispanic, second-generation immigrant living in Kansas, I feel less welcomed now, knowing I am being profiled for additional factors.

This type of policing is not considered racial profiling when an individual’s identifying factors like race, ethnicity, and national origin are combined to initiate an enforcement action. As a Brown, Hispanic, second-generation immigrant living in Kansas, I feel less welcomed now, knowing I am being profiled for additional factors.

This bill is being cheered on by far-right politicians and hate groups. Organizations like the Federation for American Immigration Reform (FAIR) use the misnomer “anti-sanctuary state legislation” to discuss HB 2717, but it is in fact anti-immigration law. The Southern Poverty Law Center (SPLC) has labeled FAIR a hate group.

According to the SPLC, FAIR’s leaders have ties to white supremacist groups and eugenics. Their current executive director, Dan Stein, is also on the board of directors for Immigration Reform Law Institute (IRLI).

If you were not aware, former Kansas secretary of state Kris Kobach served as legal counsel for IRLI. The institute made national headlines when former investigative associate Ian M. Smith resigned as a DHS policy analyst after The Atlantic obtained and shared emails tying Smith to white nationalists in 2018.

This report advocates, in a section titled “Criminal Aliens and Interior Enforcement,” that “DHS must restore and fully fund 287(g) agreements, particularly ‘task force’ model agreements,” and “DHS must allow ICE agents to question any alien they have reasonable suspicion to believe is in the country unlawfully, regardless of circumstance.”

All of this is done under the supervision of Immigration and Customs Enforcement.

Giving ICE supervision over officers in state and local law enforcement agencies is problematic. The last two ICE directors have attended anti-immigrant events led by hate groups. Ronald Vitiello, former acting director of ICE, attended a FAIR media event in 2018 in Washington, D.C. This month, it was reported by the Daily Beast that Trump-appointed, former ICE Director Tom Homan attended an event referred to in the article as a “Nazi conference.”

The current acting ICE director, Tae Johnson, is also a Trump appointee. Under Trump’s administration, nine individuals served as acting director of ICE, and none were confirmed by the senate. Current Biden nominee Ed Gonzales has not been confirmed and may not be, as he faces domestic abuse accusations.

Both the Finney County’s Sheriff Office and the Jackson County’s Sheriff’s Office have agreements with DHS. More deputized ICE agents are coming. Jackson County Sheriff Tim Morse and Shawnee County Sheriff Brian Hill went to D.C. in September of 2019 to discuss border security and “other hot topics.” They were not the only Kansas sheriffs in Washington, D.C. Sheriff David Groves of Cherokee County and Sheriff Andrew Dedeke of Leavenworth County were also there.

I foresee more local law enforcement agencies signing up to work with ICE. They will make Kansas less welcoming, one city or county at a time. For a state actively recruiting people and businesses to move here, I find this contradictory.

Through its opinion section, the Kansas Reflector works to amplify the voices of people who are affected by public policies or excluded from public debate. Find information, including how to submit your own commentary, here.

After groundbreaking slave reparations report, what next?

Thu Jun 9 , 2022
Reparations experts and advocates largely welcomed a move by California to publicly document its role in perpetuating discrimination against African Americans but wondered if the slew of recommendations in its report released this week will result in measurable change. “The danger here is that everyone reads it and nods their […] 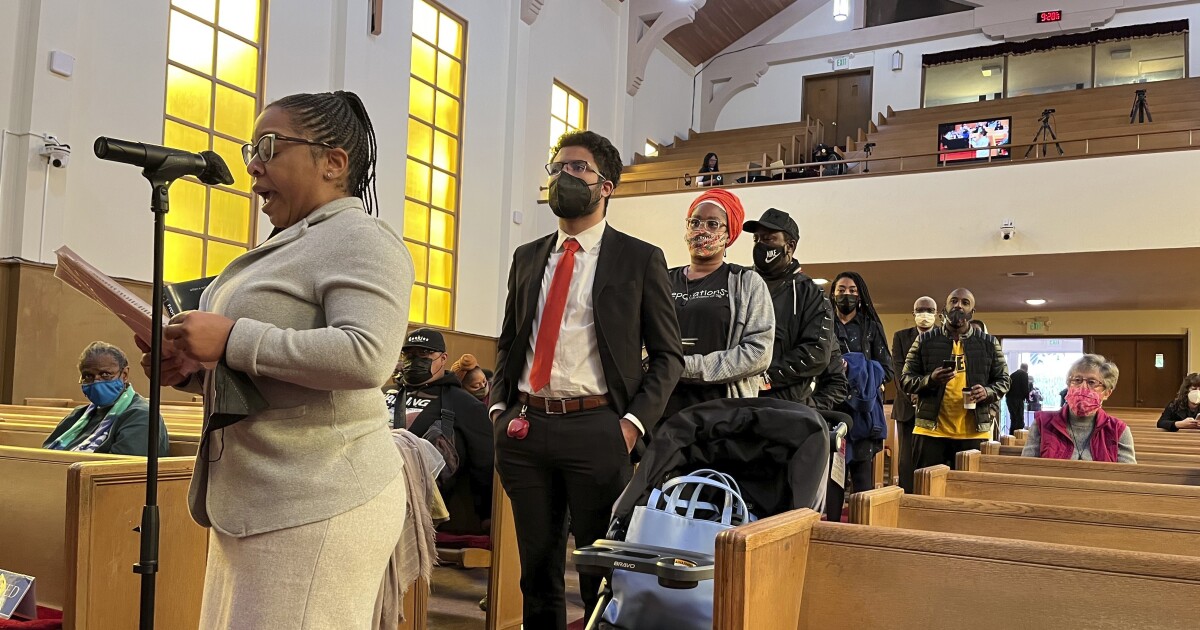