The Biden administration announced Friday that it’s lifting controversial pandemic-related border restrictions under which the US has expelled thousands of migrants without giving them access to their legal right to apply for asylum.

The so-called Title 42 policy, first enacted by the Trump administration in March 2020 at the outset of the pandemic, will end on May 23. It has allowed the US to expel migrants without a hearing before an immigration judge more than 1.7 million times, with many being caught trying to cross the border multiple times. The policy has been a source of internal strife at the Centers for Disease Control and Prevention, where scientists initially opposed its implementation; it even spurred a senior State Department official, Harold Koh, to rebuke the administration as he left his job.

The CDC says in its Friday order that preventing migrants from entering the US is “no longer necessary to protect the public health,” though public health experts outside the agency have long argued that it was never necessary. It’s a seismic change in US policy for migrants who have been stranded in northern Mexico for years, where they have been targets of violence and extortion.

It also brings challenges for Biden administration officials, who face the enormous task of safely and humanely processing what will likely be a sharp increase in the number of migrants arriving on the southern border in the coming months. The administration is preparing for a worst-case scenario of as many as 18,000 migrants arriving daily after Title 42 is lifted, up from an average of about 5,900 in February. Meanwhile, officials will also have to fend off inevitable attacks from Republicans eager to falsely depict President Joe Biden as an “open borders” Democrat ahead of the midterm elections.

I discussed some of those challenges with Tyler Moran, a senior adviser for migration to Biden who stepped down from her post at the end of January. She previously served as the executive director of the immigrant advocacy group Immigration Hub. Moran is now working as an independent consultant. Our conversation is edited for length and clarity.

How do you anticipate this policy change impacting the number of migrants arriving on the southern border?

First and foremost, people will have the right to ask for asylum. We don’t know what the numbers are going to look like and there is a lot of uncertainty. That is why the administration is planning and gaming out different scenarios at the border and what resources will be needed for each one.

The determination by the CDC that there is no longer a public health justification to expel migrants doesn’t mean that the borders are open. Not everyone is going to seek asylum, and not everyone is going to qualify for asylum. Some people will be processed into the country to await their court date and others will be deported because they either don’t request asylum or don’t qualify for it.

The number of repeat encounters at the border increased significantly due to Title 42, so we should anticipate that those encounters will decrease. On the other hand, cartels and smuggling networks are highly sophisticated and will misrepresent any change in US policy to recruit people. Human trafficking is part of their business model. So there is no doubt that they would use any shift in Title 42 to message that everyone should come.

That’s why the administration has an interagency plan to address any increase in migration. In addition to being prepared now to process people in an orderly way, the administration is also implementing strategies that were put in motion last year, including addressing the push factors that force people to leave their homes, creating more legal channels for people to migrate and working with countries in the region to go after smugglers.

What will need to happen before Title 42 is lifted in order to ensure that immigrants are processed at the border safely and humanely?

There has already been a lot of planning and also lessons learned from last year. The plan includes surging personnel and resources to the border — and having the capacity to decompress a sector to avoid overcrowding in Border Patrol stations and ensure that there can be orderly processing. That means moving people to other sectors of the border and working with other agencies for transportation, health care, sanitation, and other resources.

DHS recently announced a Southwest Border Coordination Center to coordinate planning, operations, and interagency support. Having DHS physically in the room with other agencies makes a huge difference. It allows for real-time troubleshooting. And you can’t underestimate the ways in which the federal government can be siloed without deliberative coordination.

Do you think the administration is giving itself enough time to implement those systems with a May deadline?

I do, because they’ve been planning for months, but it doesn’t mean that it isn’t going to be messy. The White House is very involved in running an interagency process to ensure that it is all hands on deck.

Why do you think this decision to lift Title 42 is coming at this particular moment?

We knew it was going to come at some point. The CDC assesses the order every two months. The president indicated in the State of the Union that, because of the progress made on combating COVID, we are moving back to a more normal routine. That includes taking down mask mandates, people going back to school and work, and that also means that the immigration system returns to normal. The administration is also standing up a vaccination regime for people who will be processed into the country.

There are a lot of public health experts outside the CDC who said that there was never a legitimate public health rationale for Title 42. What do you make of those statements?

That they are speaking from a place of knowledge and have a right to share their medical opinion.

Republicans are already gearing up to make this an electoral issue heading into the midterms, regardless of how things shake out once the policy is lifted. How should Democrats anticipate and respond to those GOP criticisms?

Republicans were screaming open borders when Title 42 was in place and a million people were expelled. So their posturing isn’t based on facts; it’s just an electoral strategy. I will note that in the 2018 midterms, many Republicans ran on a “caravan” of migrants coming to the border and lost their races.

It is important for Democrats to articulate to the American public where they stand, which is for a well-managed border and a fair, orderly system. Most of the public supports this approach. If Democrats don’t say anything, it puts them at a disadvantage because Republicans are able to fill the void.

The administration can do a lot to fix the immigration system but there is a need for legislative action to update immigration laws, to fund [US Citizenship and Immigration Services] to be able to adjudicate asylum claims efficiently and fairly and to create an earned path to citizenship for those that are here. But Republicans have blocked those efforts.

Looking ahead, migration at the southern border has typically subsided during the hot summer months in previous years. But do you think that migration patterns have changed?

If you just look at last year, seasonal trends are a thing of the past. There has been a very significant shift in migration, both in sending countries and the composition of people.

In 2014, it was largely people from the Northern Triangle of Central America who were fleeing because of violence. Now, we have massive movement across the Western Hemisphere attributed to corruption and instability, but also because of Covid economies and climate change.

The administration’s approach acknowledges that these challenges cannot be solved through border policy alone — or even US policy. We have to work with partners in the region to develop a hemispheric strategy. That means other countries taking in refugees, bolstering their asylum systems, creating more legal channels for people to be able to work or be reunited with family, and targeting cartels and smugglers who are preying on people’s hope.

While the US must have a robust asylum policy, we also need to acknowledge that not everyone coming to our border is seeking asylum and we need better solutions to address the other reasons that forced them to migrate.

What’s your assessment of the progress that the administration has been making on its regional approach to migration?

There is a strong commitment to creating new legal channels, protection in the region, and expanding refugee numbers, but this is all going to take time.

I’ll give you one example. The administration reinstated the Central American Minors (CAM), which provides unaccompanied children with a safer, legal pathway to migrate.

The Trump administration shut the program down and it took time to put systems back in place; the program depends on the same refugee resettlement system that the former administration also gutted and that was working to resettle Afghan allies; and Covid forced embassies to work at reduced capacity. So the current administration had to start from scratch in a pandemic.

Now that the infrastructure has been rebuilt, we should see many more children processed under the CAM program this year.

You come from the immigrant advocacy world, but you also served in the administration, which has at times been at odds with immigrant advocates on border policy. How do you reconcile the interests on both sides?

None of these challenges are easy. I think there’s common ground on figuring out the future of asylum processing. Our asylum system simply wasn’t built for the number of people who are seeking protection and there is a need for legal services to help people navigate the system. There also needs to be collective thinking about solutions for the people who are migrating for economic reasons and/or climate change.

There is alignment on the legislative changes that are desperately needed. There just aren’t enough visas — or the right kind of visas — to meet the demand for employment or family reunification, but Congress has not updated immigration law in 30 years.

Republicans who are complaining about the border have a responsibility to do their job so employers have the workers that they need and it doesn’t take 20 years to reunite with a family member. They also need to ensure that [US Citizenship and Immigration Services] has enough funding to clear the backlog, process visas, and adjudicate asylum claims. Without this, the administration is working with one hand behind its back.

The administration can do a lot, but they can’t fix the immigration system on their own.

Laws Vilifying Transgender Children and Their Families Are Abusive

Thu Apr 7 , 2022
On Monday, it became illegal to talk about gender identity or sexual orientation in hundreds of classrooms throughout the state of Florida. This law is one of historic numbers of proposed laws and measures targeting trans youth in Texas, Arizona, Alabama, and more than one dozen other U.S. states. Tens […] 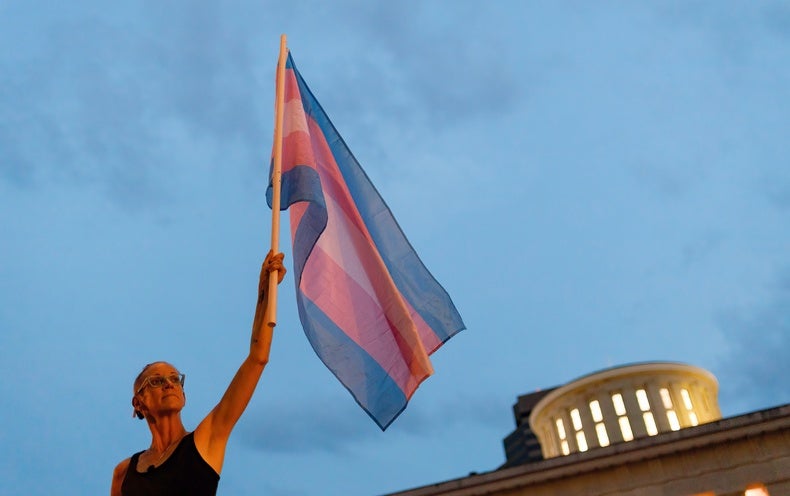