California law generally requires employers to provide employees with a safe place to work. What, if anything, does this obligation entail when an employee works at home or another employee visits that private residence for work-related activities? This question has added importance after the significant increase in employees working from home as a result of the COVID-19 pandemic.

The California Court of Appeal’s new decision in Colonial Van & Storage, Inc. v. Superior Court addressed some of these issues. Specifically, it considered whether an employer’s duty extends to ensuring that “an off-site meeting place for coworkers and business associates like an employee’s private residence is safe from third party criminal harm.” The court concluded that the duty did not extend to an employee’s home, so the employer was not liable for injuries suffered there—at least with a criminal act by a third party. The decision, however, likely will provide guidance on employer’s duties and any potential liability involved with employees working at home more generally.

The case involved a tragic – and fortunately uncommon – violent act. Defendant Colonial Van & Storage employed a married couple in different positions. The wife was a supervisor and allowed to work at home at her discretion. She often invited coworkers to her family’s home for work-related reasons. In March 2017, the couple hosted a dinner. They invited a Colonial coworker and a business associate from another company, who brought her infant daughter. The adults socialized but also were “networking and engaged in job-related tasks.” The wife’s son, a veteran with post-traumatic stress disorder, lived in the home. Without warning, he left the living room, returned with a handgun, and opened fire. He killed his stepfather and wounded the other people present. In the resulting criminal case, the son pleaded no contest to several charges, with the court finding him legally insane.

The coworker and visiting business associate sued Colonial, along with their host, for negligence and intentional infliction of emotional distress. They also alleged that Colonial was vicariously liable for any wrongful acts by its employee who used her home for work.

After the Fresno County Superior Court denied Colonial’s motion to dismiss the lawsuits against it on summary judgment, Colonial filed a writ petition with the California Court of Appeal. The appeals court recognized the case as presenting an issue “of paramount importance to public welfare during the current COVID-19 pandemic: Whether an employer has a duty to ensure that off-site work locations are safe from third-party criminal conduct.” It agreed with Colonial and granted a writ dismissing the claims against Colonial, concluding that “an employer does not have a duty to protect working-at-home employees from third-party criminal conduct as a matter of law.”

Employer Had No Duty to Protect at Employee’s Home

The court first considered whether Colonial had a duty to protect employees at its employee’s home, which it did not own or possess. A defendant’s control over property may create a duty. The court analyzed whether Colonial took actions with respect to the employee’s home that normally would be “associated with business ownership.” It specifically considered whether Colonial set specific hours for employees to work in the home, provided or paid for landscaping or a security system, designated the home as a business location for insurance and tax purposes, or named the home as an extension of its business in any company document or communication with outside businesses. None of these circumstances existed.

The decision further emphasized that California courts have refused to impose a duty to protect against tortious or criminal harm committed by third parties on property that a defendant “did not actually own, possess, or control.”

The court next considered whether Colonial could be deemed to exercise control of the employee’s home “by enjoying a commercial benefit from its use as a worksite.” It noted that California precedent holds that this factor is not dispositive. With strong language, the Colonial court rejected the notion that merely deriving a commercial benefit amounts to an employer’s control in the context of employees working at home, which “would mean that every employer would be absolutely liable for any injury suffered at home by working-at-home employees.” Under such a rule, “[t]o avoid liability, employers would have the onerous task of ensuring these employees maintained the safety of their private residences and the mental health of their fellow residents and invitees.” The court thus rejected the “invitation to distort the recognized principles of premises liability or negligent management of property.”

Lastly, the court held that the injured coworker could not rely on a special relationship (i.e., employer-employee) to impose a duty on Colonial in this case. The shooting was not at her place of employment, but rather “at a private residence that Colonial did not control.” The court concluded that the employee “could not reasonably expect any protection afforded by its special relationship with Colonial to reach into the setting of a private residence.”

The Harm Was Not Foreseeable

In addition, the court concluded that a lack of foreseeability of harm here precluded imposing liability on Colonial, even if Colonial controlled the home or a special relationship imposed a duty to protect. Especially in the circumstances at issue, it held that “imposing on an employer, like Colonial, a duty to ensure that a working-from-home employee’s private resident is safe for visiting coworkers and business associates would be entirely unfounded and unfair.”

The court found no evidence that Colonial had “actual knowledge” that the son posed any risk, was aware of the son having mental problems or access to firearms in the home, or that any prior violent instances happened at the home. The son’s “deranged and motiveless attack was so unlikely to occur within the setting of modern life that a reasonably prudent employer would not envision its occurrence in considering the obligation to protect employees from reasonably foreseeable harm.” While the employee whose son opened fire at her home knew about his issues, that knowledge could not be imputed to Colonial because her knowledge was not within the scope of her employment. His mental disorder and history were “not related to the business” in which she and Colonial were engaged, so the working-at-home employee “had no duty to disclose them.”

Public Policy Weighed Against Imposing Liability on the Employer

Finally, the court reasoned that public policy heavily weighed against imposing “a duty on employers to ensure that working-at-home employees are safe from third-party criminal conduct.” It recognized that the “extent of the burden to employers having to shoulder such a duty and the consequences to affected employees would be extremely onerous.”

A finding of liability would cause employers to “become the insurers of the safety of working-at-home employees in the event of any intentional harm, even if the employer had no reason to expect it.” The court viewed this prospect as an “unrealistic obligation.” Avoiding liability would require employers “to undertake costly and time-consuming measures,” such as “inspecting homes for weapons and other safety hazards, vetting all residents and visitors, and monitoring the daily activities of residents, visitors, and the condition of the home at least during working hours.” The court also saw “building a fence, posting security guards, and installing metal detectors, security systems, and video cameras inside and outside the home” as logical – but unreasonable – consequences of any such a duty.

Nor might such burdensome steps be beneficial or effective. The court acknowledged that when a mental disorder induces criminal conduct, “employers are not in the best position to stave off a violent outburst.” As a result, “shifting the burden from medical professionals to employers to deter such conduct would not necessarily prevent future harm to working-at-home employees.”

For employees, the court saw that an “employer’s efforts to avoid liability under a duty to protect would exact a high social cost.” In order to work at home, employees “would have to be willing to accept their employer’s intrusions into their daily lives, the modifications to their home, and working in a state of siege.” The court warned of potential problems with attempting background checks, intrusions into privacy, inability to obtain confidential information, and conflicts with various legal protections.

The Colonial court highlighted the more recent increased importance and necessity of employees being able to work from home. The plaintiffs argued that “employers could avoid liability and the difficulties of providing safety by simply refusing to allow employees to work at home.” The court flatly rejected this proposition on policy grounds, holding it would “create substantial burdens.” As with the effects that the COVID-19 pandemic’s stay-at-home orders brought, the court recognized that many employees might have been legally required to work at home. It also recognized practical realities that many employees need to work at home for purposes of child care, elder care, or their own disabilities: “Not allowing these employees to work at home because their employer decided that someone else visiting or residing in the home may present a risk of criminal activity would be unduly difficult, particularly for those employees who could not afford the expense of necessary child or elder care.”

Even as the COVID-19 pandemic subsides, for various reasons, a considerable number of employees in California will continue to work from home for all or part of their work time. The Colonial decision is favorable for employers. It recognizes the importance of employees being able to work from home, while seeking to limit potential employer liability in a logical and reasonable manner. The decision provides useful guidance on how California courts will analyze claims seeking to hold an employer liable for injuries that an employee suffers while working at his or her home or at another employee’s home. It reviews factors that a court will consider in determining whether an employer owes a duty of care or to protect. The decision thus offers guidance on considerations that an employer should take in order to eliminate or reduce any possible liability for allowing employees to work at home.

Importantly, the decision is not a blanket holding that employers have no liability for an employee’s injury suffered while working at home or at another employee’s home. The decision focused on an employer’s liability for injuries caused by a third party’s criminal conduct. Other factual situations and contexts likely will arise later. Colonial also did not address whether worker’s compensation benefits would apply in that situation or other scenarios when an employee experiences injury in a work-at-home setting. Still, the new decision undoubtedly provides helpful direction and will help employers defend against claims for alleged injuries in the course and scope of employees working at home.

Thu Mar 31 , 2022
Immigration law is not easy. Rutgers University law professor Elizabeth Hull says that our immigration laws are “second only to the Internal Revenue Code in complexity.” According to the American Bar Association (ABA), “To say that immigration law is vast and complex is an understatement.” Nevertheless, attorneys do not need immigration law experience to become an immigration judge. You […] 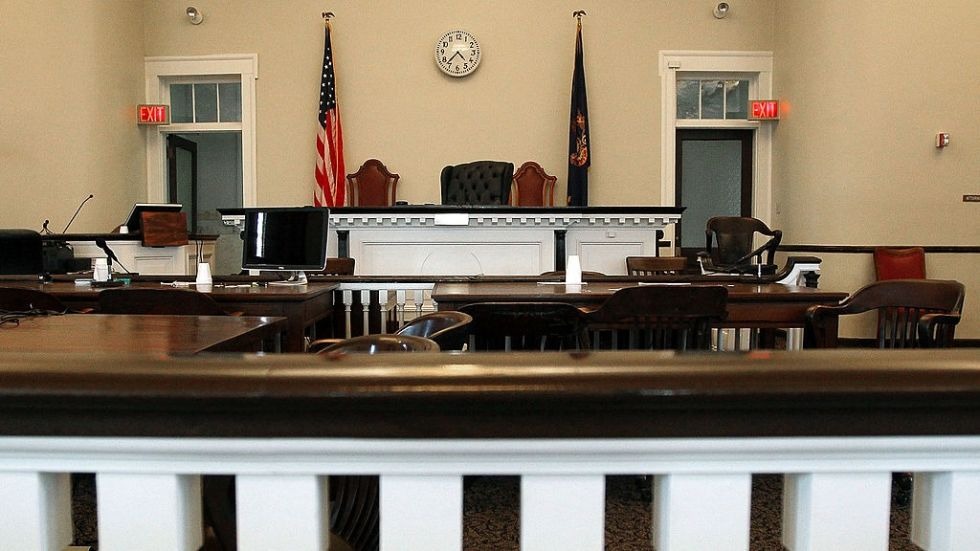