Democrats have given every indication that they will move quickly on nominating a Supreme Court justice to replace the outgoing Stephen Breyer, with the White House confirming that Joe Biden will keep his campaign-trail promise of putting up a Black woman for the job. Already, speculation has solidified into a short list: D.C. Circuit Court Judge Ketanji Brown Jackson is the presumed front-runner, with California Supreme Court Justice Leondra Kruger mentioned second.

But a third candidate has been gaining in the speculative fervor: South Carolina District Court Judge J. Michelle Childs. Her biggest enthusiast is home-state Rep. James Clyburn (D-SC), the highest-ranking Black leader in Congress and a close adviser to Biden. In fact, Clyburn was the one who got Biden to make the Supreme Court pledge.

Clyburn has been whipping support for Childs with an enthusiasm far beyond that which he dedicated to Democrats’ police reform bill or the Build Back Better Act. In just a few short days, he has hit a number of news networks to advocate for her appointment. “She has the experience that is needed,” he said on MSNBC, a dig at Jackson, who has been criticized in the early goings as underqualified for the post.

Elsewhere, Clyburn has made explicit what CNN has argued implicitly when the network lamented that “another testy Supreme Court battle is the last thing America needs.” Answering this call for Democrats to hone their pick to Republican preference, Clyburn has put forward Childs as a bipartisan answer. “I want to make sure that it’s a woman that will get universal support. When I say universal, I mean bipartisan support,” he said Wednesday on CNN. “I know that Michelle Childs will have the support of several Republicans.” One of them, South Carolina’s own Lindsey Graham, appeared to endorse Childs over the weekend.

Childs’s experience is worth scrutinizing closely. As a lawyer, Childs served as an associate and then partner at Nexsen Pruet Jacobs & Pollard, from 1992 to 2000. At Nexsen Pruet, Childs worked primarily in labor and employment law, principally working on behalf of employers against allegations of racial discrimination, civil rights violations, and unionization drives.

Bloomberg Law has 25 cases registered in which Childs participated during her time at the firm; 23 of those involve alleged employment discrimination or other employment-related civil rights violations. Race and gender were common factors in such suits; seven such cases entailed race-based job discrimination, and another three involved sex-based job discrimination. In all but two registered instances, Childs was not representing the plaintiff but the defendant, meaning that she overwhelmingly represented employers accused of violating civil rights and gender discrimination laws in the workplace.

These cases catalogued commonplace abuses. In Greene v. Conseco Finance, for example, the plaintiff, an African American woman, alleged race and pregnancy discrimination in a situation where the company denied her a promotion and then terminated her outright. Childs represented the employer, Conseco. The case eventually resulted in a jury siding with the plaintiff, awarding her $193,000 in damages after Childs withdrew. In Harris v. L&L Wings, a plaintiff alleged near-daily sexual assault by a workplace supervisor for years; Childs represented the company. A jury eventually sided with Harris, the plaintiff, awarding compensatory and punitive damages and even attorney’s fees.

Childs’s experience is nothing like the “diversity of experience” that the Biden administration has championed.

Meanwhile, Nexsen Pruet, where Childs was a partner, has for years boasted of its anti-union services, advertising to firms hoping to keep their workplace “union-free,” “offer[ing] strength in unfair labor practice and union representation issues,” and warning against the impacts of the PRO Act, Democrats’ signature unionization bill that was included in the Build Back Better Act.

While some may respond that a lawyer merely serves the client and cannot be held accountable for their client’s sins, as a judge Childs also sports a track record of opposing workers in cases of alleged discrimination. As recently as this year, she dismissed a case where an employee alleged she was sexually harassed, subjected to a hostile work environment, and subsequently fired upon reporting it.

That is a far cry from the sort of judicial nominee Biden has prioritized as president, with his administration making judicial appointments one of its top ambitions. In the year since he was sworn in, Biden has nominated (and the Democratic Senate has confirmed) judges at a record pace. Despite some underwhelming and confusing choices, he has arguably elevated more public defenders and civil rights lawyers to the federal bench than any other president in history.

Clyburn has tried to spin Childs’s record as anti-elitist, given that she does not have the informal qualifications for Supreme Court justices—she did not go to Harvard or Yale Law School—or the more formal ones—she’s never been a circuit court judge. Cribbing the White House’s own language in its support for public-interest nominees, Clyburn claimed his support of her is based on her “diversity of experience.”

But her experience is nothing like the “diversity of experience” that the Biden administration has championed. Rather, her record looks much more like the typical corporate lawyer that the White House has purposefully tried to get away from in its attempt to remake the federal bench. Appointing a Black woman with a history of defending employers against discrimination cases brought under the Civil Rights Act would certainly undermine the message Biden has sought to convey with this nomination, and make for a confusing capstone to the administration’s judicial project. And with other Black women available who do not have anything close to this record, it would be especially puzzling.

Clyburn has been credited with single-handedly rescuing Biden’s flagging presidential campaign and thus delivering him into the Oval Office, and he has called on Biden for not a few favors in return. His campaign for Childs, then, is meaningful, and not without precedent. According to The Washington Post, “Clyburn has been recommending that Biden select Childs for the D.C. Circuit since last January, before the president was formally inaugurated, according to a person close to the veteran lawmaker.”

Childs’s track record does not look much like the other presumed front-runners in Jackson and Kruger on issues of labor and discrimination, though that nuance will be lost on the GOP either way. Graham notwithstanding, Republican senators have telegraphed that they will oppose this nomination and do everything to slow it down. Clyburn’s pledge of Republican votes for a candidate he’s friends with, and whom his corporate donors also just might prefer, is a gambit with no upside for the Biden presidency, for leading Senate Democrats, or for millions of American workers who face discrimination daily.

Tue Feb 8 , 2022
Related Practices & Jurisdictions The red-hot market for nonfungible tokens, or NFTs, continues to draw regulatory scrutiny. A Department of the Treasury report issued on February 4, 2022, is the latest to focus on potential regulatory issues associated with this digital asset class. The report, entitled “Study of the Facilitation of Money Laundering […] 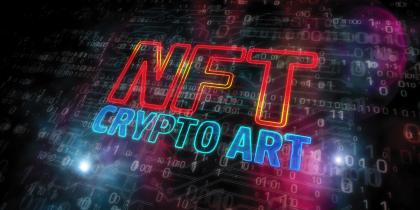