As the Biden administration completed its first year, a flurry of news reports highlighted the bipartisan disappointment with its record on immigration. While liberals objected to the continuation of some of former President TrumpDonald TrumpConservative leader O’Toole ousted in Canada Biden nominee faces scrutiny over fintech work, compensation Overnight Defense & National Security — Pentagon deploying 3,000 troops to Europe MORE’s policies, such as closing the U.S. borders, conservatives alleged that President Biden

The criticisms directed at Biden are not entirely fair. Consider the immigration situation that he inherited in January 2021. Trump had dedicated four years to restrictive immigration measures like no president in modern U.S. history. To that end, policy after policy was put into place. Reversing course in a massive federal bureaucracy is not something that can be done overnight — or even in a year.

Additionally, four years of tough measures and verbal attacks on immigrants did not solve the nation’s immigration problems, but arguably, made them worse. The Trump administration’s efforts ensured that the longstanding and serious immigration problems remained for the new administration: Approximately 11 million undocumented migrants lived in the country before — and after — the Trump presidency.

With the election of Biden, hope sprang eternal among immigrants’ rights activists. The truth of the matter is the Biden administration has dismantled some harsh Trump immigration policies. Gone are the Muslim ban and immigration raids on 7-Eleven convenience stores and state courthouses. Vitriol about immigrants no longer comes from the White House and the Biden administration has brought rationality to the discussion of federal immigration policy. In that vein, Vice President Kamala Harris

Kamala HarrisForeign aid is at a crossroads — here’s the path to take Sen. Luján suffers stroke, expected to make a full recovery Congress, not Biden, should be held accountable for immigration reform MORE has started a discussion of long-term solutions to stem migration flows from Central America.

The administration has also faced resistance in its efforts to change the direction on immigration. For example, the courts have rejected attempts to reopen to new applicants the Deferred Action for Childhood Arrivals (DACA) policy, which provides relief to undocumented young people, or to dismantle the “Remain in Mexico” policy requiring asylum seekers to wait in Mexico while their claims are being decided. Republicans have adamantly fought against any effort by the Biden administration to moderate the harsh measures embraced by Trump.

That said, if one is truly interested in immigration change, the appropriate measuring stick is not what Biden did in year one but what Congress has failed to do for decades — pass meaningful immigration reform. Democrats and Republicans repeatedly claim that the current immigration system is “broken” but have done absolutely nothing to fix it. Presidents Bush, Obama and Biden have been unable to move Congress to pass reform legislation. Early in Biden’s term, the U.S. Citizenship Act was introduced in Congress. The bill, backed by the president, has languished in Congress.

Reform is long overdue. The comprehensive U.S. immigration law, the Immigration and Nationality Act of 1952, was forged at the height of the Cold War and designed to exclude and deport communists. Although amended on many occasions, it focuses more on keeping people out than letting people in. Economic and humanitarian concerns, not fears of the spread of communism, must be the touchstone for the immigration laws of the 21st century.

Immigration solutions need long-term blueprints most appropriately written by Congress, not quick fixes by a president. For example, economic development and building political institutions in Central America that diminish migration pressure take time and congressional appropriations. Effective efforts cannot realistically be achieved in one year by a new president.

The bottom line is that the nation’s immigration issues can only be effectively addressed if Congress engages in the serious and difficult task of formulating long-term solutions and approaches that outlast any president. In a time of political discontent, that is no small feat.

But, there are much-needed reforms that Congress could make to the U.S. immigration system. To start, Congress could provide a path to durable legal immigration status for DACA and Temporary Protected Status (TPS) recipients, as well as for other undocumented immigrants.

Lawmakers can work to restructure the immigration court system, which is poorly funded, inadequately staffed, lacks independence, and has a backlog of more than 1.5 million cases. The visa system needs reforms to eliminate visa backlogs and to allow for sufficient admission of immigrants to satisfy U.S. labor and family reunification needs.

Congress needs to create a system that is fair to immigrants and allows for effective enforcement, not a misguided border wall on the U.S./Mexico border, which will cause more deaths but not halt migration.

And finally, the dehumanizing term “alien,” which has helped to obscure and rationalize the treatment of people inconsistent with our constitutional values, needs to be removed from U.S. immigration laws.

Congress will, at some point, meaningfully address immigration reform. The sooner it does, the sooner the nation will begin the process of moving forward. One president can only be reasonably expected to do so much.

Kevin R. Johnson is dean and Mabie/Apallas professor of Public Interest Law and Chicanx Studies at the University of California, Davis, School of Law.

Thu Feb 3 , 2022
Tuesday, February 1, 2022 The use of digital health to deliver healthcare has seen unprecedented growth over the past few years, with significant acceleration due to the COVID-19 Public Health Emergency (PHE). As patients seek ways to empower themselves and take more control of their health and well-being, this demand […] 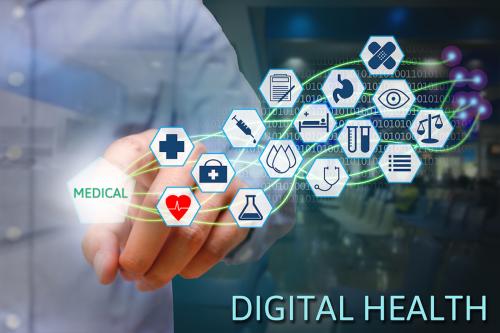