Today let’s talk about the importance of protecting your credit from being stolen.

For last week’s column, I spoke with Eva Velasquez, the CEO of the Identity Theft Resource Center about the dangers of cyberattacks in the wake of the Ukraine crisis. We went over steps you should take to protect yourself and your accounts.

Betty Lin-Fisher column:Tips to protect yourself from cyberattacks with crisis in Ukraine

Velasquez and I also discussed the importance of credit freezes.

The subject has come up again because a large number of people within the last month likely received an email notifying them that they are eligible for four years of free credit monitoring as part of a settlement in the large Equifax data breach from several years ago.

In September 2017, Equifax, one of the three major credit reporting agencies, announced a data breach that exposed the personal information of 147 million people – nearly half the U.S. population. The company agreed to a global settlement with the Federal Trade Commission, the Consumer Financial Protection Bureau and 50 U.S. states and territories.

The initial deadline to file a claim in the Equifax settlement was January 22, 2020.

People could sign up for four free years of credit monitoring service from the three major credit bureaus. The free service via the settlement is being run by Experian, one of Equifax’s competitors. There is also up to $1 million in identity theft Insurance, which provides coverage for certain costs and unauthorized electronic fund transfers should your identity be stolen.

People also had the option of choosing a cash payment of up to $125 if they already had credit monitoring services. That cash settlement is still pending, according to the ID Theft Resource Center team. The period of time to submit expenses originally was 2020, but the court has extended the deadline until 2024 to allow for delayed damages to be claimed. The award payment that each person ultimately receives will be determined by the total number of claims. Because final claims are not due until 2024, the amount due can’t be determined until then.

Here is a link to the Equifax Breach Settlement page with frequently asked questions.

What is credit monitoring and is it worth it?

Velasquez and her San Diego-based nonprofit are very helpful for consumers who have been victims of identity theft or in counseling people on how to protect themselves. Their services are free at  www.idtheftcenter.org or 888-400-5530.

By freezing my credit file at all three major credit bureaus, I’ve locked all of the doors of my house to prevent anyone from breaking in. A credit monitoring service will tell me after someone has already gotten in.

So paying for a credit monitoring service — especially without a credit freeze — is not a wise move. Getting one for free could be helpful, but it’s really up to you, she said.

It definitely shouldn’t take the place of a credit freeze, Velasquez said.

“Credit freezes are free thanks to some legislation a number of years ago and it’s free to thaw them and refreeze them as many times as you need to,” said Velasquez.

Some people get confused by this, but a credit freeze will freeze people — including yourself unless you “thaw” the freeze — from opening new credit in your name. It will have no bearing on existing credit you have or your ability to use your existing credit cards. It also has no bearing on your credit score.

It is important to freeze your own credit and also your spouse’s credit, if you are married.

There can be a slight inconvenience factor, which requires some planning. So, for instance, if you are at the store during the holidays and you want to take advantage of an offer to open a store credit card to get 10% off that big TV purchase, you will have to get on your phone or get online to lift or “thaw” your credit, which you can do instantly. You can thaw your credit for a specific period of time and then it will re-freeze, or thaw it permanently (I wouldn’t advise the latter).

When we’ve been in the market for a new car and I knew we were going to be taking a loan, I asked what credit bureau the loan company would be checking and then I “thawed” that report for myself and my husband. That doesn’t always work since the sales person may not know what bureau the financing company works with and in those situations, I would just temporary lift my credit at all three bureaus for the time frame when I am car shopping. It takes some more time, but especially now that credit freezes are free, they are easy to do. (We used to have to pay $5 for each lift). If I have a chance, I still try to only lift at the bureau where the check is happening.

Can kids’ credit be frozen?

Velasquez said it has gotten much easier to freeze credit in a child’s name in recent years, which is good news. Several years ago, I tried when my kids were still minors and it was really difficult.

It sounds counterintuitive to freeze credit in a child’s name, but there are victims of child identity theft by stealing your child’s name and Social Security number, said Velasquez.

“These thieves are very crafty. They will make these fraudulent profiles using a birth date, but not of that minor. They’ll use a different birth date that makes them of age, that they can avail themselves in the credit market of the credit marketplace and build these profiles,” she said.

A credit freeze will stop that behavior, she said.

The advice has changed about placing the freezes on children’s reports or even running reports for your children, she said.

“If we look back maybe eight to 10 years ago, there was a time when the Identity Theft Resource Center did advise people please don’t try to run your children’s credit,” she said.

But processes and changes in state laws have made it easier because a credit freeze is not asking the credit bureau to run a credit report on your child but identifying a Social Security number belongs to a minor child and asking the bureau to freeze it, Velasquez said.

One caveat, Velasquez said, is parents need to keep track of the credit freezes and especially when children get close to turning 18 or if they are going to college and will be seeking loans for financial aid, they will need to thaw their credit.

Here’s how to freeze your credit reports

One last tip from Velasquez: Last year, there were numerous reports of unemployment fraud or scammers trying to claim unemployment in others’ names. This was widespread in Ohio. Many of the victims received a 1099 for that unemployment erroneously.

More:Hundreds of thousands of Ohioans are victims of unemployment fraud. Here’s what to do

If you get an erroneous 1099 form, report it to your state’s unemployment office. The IRS is advising people to file returns but do not include the income from the fraudulent 1099, Velasquez said.

Ohio’s unemployment website to report fraud is https://unemploymenthelp.ohio.gov or call 833-658-0394

Beacon Journal staff reporter Betty Lin-Fisher can be reached at 330-996-3724 or [email protected] Follow her @blinfisherABJ on Twitter or www.facebook.com/BettyLinFisherABJ To see her most recent stories and columns, go to www.tinyurl.com/bettylinfisher

Thu Mar 17 , 2022
Related Practices & Jurisdictions One of the most interesting trends in the Law Court’s jurisprudence (at least in the mind of this blogger) is the continued renaissance of the Court’s primacy doctrine – an issue addressed before on this blog.  As explained in two prior blog posts (here and here), the primacy […] 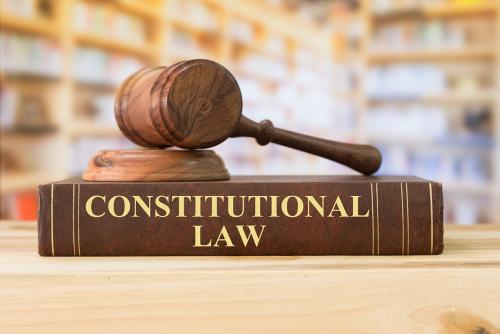