When Joe Biden dismantled Trump-era border protections on his first day in office, he created a slow-burning national security crisis.

The lawlessness at the border, created deliberately by Democrats, is an invitation to evildoers the world over to enter America and take advantage of newly lax law enforcement.

A video of a woman growling and eye-rolling, Exorcist-style, at border patrol agents last month in the Del Rio sector, after being arrested for human smuggling, gives us a glimpse of the gates of hell this administration has opened.

And thanks to new rules instituted in September by the peculiarly impassive Secretary of Homeland Security Alejandro Mayorkas, illegal aliens who commit crimes are not automatically deported unless they are deemed a “threat to public safety.”

Thus, an illegal Mexican migrant arrested for painting swastikas at Union Station in Washington, DC, last month, a few weeks after being arrested for allegedly vandalizing Capitol Police headquarters, and who already has a string of felony convictions on his record, was simply released onto the streets instead of being scooped up by ICE and deported.

“For the first time ever, our policy explicitly states that a noncitizen’s unlawful presence in the United States will not, by itself, be a basis for the initiation of an enforcement action.”

But there is nothing compassionate about his policies, not for Americans and not for illegal migrants who are victimized by people smugglers.

Mexican and Chinese crime syndicates have taken advantage of the open border to flood the country with deadly drugs, particularly fentanyl, which the CDC says was the leading cause of death of Americans aged 18 to 45 last year.

A snapshot of the unheralded work of border patrol agents just last week saw a convicted child rapist and another child predator, both from Mexico, apprehended in Arizona after illegally crossing the border.

Border officers arrested another pedophile illegal alien near Roma, Texas, a Salvadorian previously deported after a conviction for aggravated sexual assault of a child in New Jersey.

Three MS-13 Salvadorian gang members also were arrested by the agents from the McAllen Border Patrol Station. One was sent to hospital with COVID symptoms.

Just another week in the life of the overwhelmed, disrespected, and demoralized men and women of Border Patrol. They know no matter how hard they work, they are only skimming the surface of criminality flooding the country.

Yet the Biden administration stands by passively as this disaster unfolds.

Inexplicably, instead of trying to staunch the flow of migrants at the border, it is busy fighting in court against the reinstatement of Trump’s effective Remain in Mexico policy.

We’ve been here before, and Don Rosenberg, whose 25-year-old son, Drew, was

by an illegal migrant driving without a license, is trying to sound the alarm to a complacent nation of the consequences to come.

“I can tell you almost every single day an illegal alien driving drunk kills somebody”, he says.

The ordeal of trying to get justice for his son in court transformed Rosenberg from a lifelong California liberal to an ardent critic of the Democrats’ open-border agenda.

He founded a victims’ support group, Advocates for Victims of Illegal Alien Crime, and under President Donald Trump, helped ensure victims were given an official role within ICE to voice their concerns, with the establishment of the Victims of Immigration Crime Engagement Office (VOICE).

But within a few months of Biden taking office, Rosenberg says Mayorkas hijacked the VOICE office and turned it into an advocacy organization for illegals.

Rosenberg says he was told the office was just being “transitioned and given a new name”.

“The reality is an office that was just for victims of illegal-alien crimes is now an office for illegal aliens,” says Rosenberg.

“If you were a victim of rape, would you want to call a rape hotline that also helps the rapist?…

“The way they present it, the American victims are an afterthought . . . [It] is another outrageous violation of our immigration laws and another service to allow illegal aliens to remain in America.”

Majorkas has acknowledged the service now will serve illegal migrants with visas and legal issues: “All people, regardless of their immigration status, should be able to access victim services without fear.”

The entire legal system is being reengineered to enable illegal migration and prevent law enforcement.

But the question is why Biden is so impassive when the issue is becoming political poison for Democrats.

Immigration is back in the top three most important issues to voters, as COVID sinks into irrelevance.

Biden is underwater on immigration in every poll. One CNBC poll in December found 69% of respondents disapproved of his handling of the issue, and 85% rated the “current state of immigration” as “poor/not so good.”

An earlier Quinnipiac poll found 67% of Americans disapprove of “the situation at the Mexican border”.

Democrats either have a death wish or a cunning plan.

Thu Feb 17 , 2022
BRUSSELS — Europe’s top court ruled on Wednesday that the European Union can withhold funding from member countries failing to uphold the rule of law, arming the bloc to step up its efforts to defend its core values. The ruling shoots down a lawsuit by Hungary and Poland, the two […] 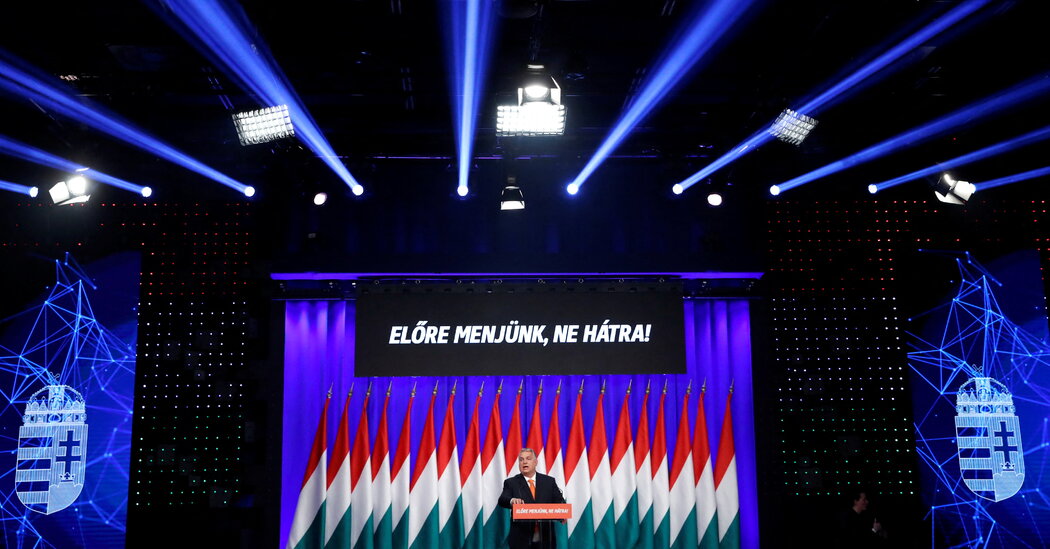