Antitrust law enforcers at the Department of Justice and Federal Trade Commission remain dedicated to increasing competition in several rapidly consolidating industries, including healthcare and labor markets. Despite two losses handed to them by juries in Texas and Colorado in favor of defendant executives, they vowed to continue their accountability crackdown. They also remain committed to exploring ways to combat the harmful effects of over-concentration on patients, workers, and the markets themselves – this includes a renewed focus on vertical integration, which has already had some impact in the technology sector. (A giant chipmaker recently scrubbed its proposed multi-billion-dollar purchase of a key producer in the chip supply chain in the face of antitrust scrutiny.)

On April 14, 2022, following an eight-day trial in Texas, the jury found the former owner, Neraj Jindel, and the former clinical director of a physical therapist staffing company, not guilty of orchestrating a scheme to fix rates and wages paid to therapists for in-home therapy. But the jury did find Jindal guilty of obstructing a 2017 FTC investigation into the alleged scheme. The obstruction finding comes with a statutory maximum penalty of five years in prison and a $250,000 fine. Jindal is awaiting sentencing (United States v. Jindal, et al., No. 4:20-CR-358, E.D. Texas, Sherman Div.).

Then on April 15, one day after the verdict was returned against Jindal on obstruction charges, a jury in federal court in Denver acquitted global kidney dialysis provider DaVita Inc. and its former CEO of charges they conspired with competitors to suppress competition for employees through no-poach agreements in violation of the Sherman Antitrust Act (United States v. DaVita Inc., et al., 1:21-cr-00229, D. Colo., Denver Div.).

Although the federal government lost both antitrust cases at trial, both cases also produced case law that may embolden the government to continue bringing criminal charges for anticompetitive conduct by executives in labor markets.

Ruling on Price and Wage Fixing

Price-fixing agreements are per se illegal, including when it comes to employers. When wages are suppressed, fewer people take jobs, and this negatively impacts competition and production. The judge in Jindal reaffirmed this in ruling against a motion to dismiss the case in late November. While Jindal’s attorneys didn’t dispute the per se illegality of price fixing, they argued that “prices” and “wages” are different concepts, so the conduct at issue was not per se illegal under antitrust law. Judge Amos L. Mazzant disagreed. “The antitrust laws fully apply to the labor markets, and price-fixing agreements among buyers – like therapist staffing companies – are prohibited by the Sherman Act,” the judge ruled. “This type of agreement is plainly anticompetitive and has no purpose except stifling competition” (United States v. Jindal, Civil Action No. 4:20-CR-00358, 2021 U.S. Dist. LEXIS 227474, E.D. Tex. Nov. 29, 2021).

The DaVita defendants argued that the underlying indictment was not about a horizontal market allocation, but a non-solicitation agreement. On Jan. 28, Judge Jackson held that, while the indictment didn’t use the exact phrasing, it did allege that “the non-solicitation agreement allocated the market.” He agreed that there were no “perfectly analogous” cases, but “that is the nature of Section 1 of the Sherman Act: as violators use new methods to suppress competition by allocating the market or fixing prices these new methods will have to be prosecuted for a first time.”

But one case — United States v. Cooperative Theatres of Ohio, Inc. 845 F.2d 1367 (6th Cir. 1988) – was “sufficiently analogous,” Judge Jackson found. In its 1988 ruling, the Sixth Circuit ruled in favor of the government’s argument that the defendants engaged in horizontal market allocation by agreeing not to solicit the customers of horizontal competitors; therefore, the case was subject to per se treatment. Judge Jackson concluded that “if naked non-solicitation agreements or no-hire agreements allocate the market, they are per se unreasonable.”

Discussing the government’s burden at the then-upcoming trial, Judge Jackson said the government attorneys would not merely need to show that the executives entered the non-solicitation agreement and what the terms of the agreement were, but that “beyond a reasonable doubt that defendants entered into an agreement with the purpose of allocating the market for senior executives and other employees.” In the end the jury in DaVita, like the Jindal jury, found that the DOJ didn’t prove its antitrust case.

Commenting on the Jindal verdict, Assistant Attorney General Jonathan Kanter seemed to take some solace in securing rulings that affirmed that wage fixing is illegal (as is lying to the government). “When obstruction affects the federal government’s investigations into labor market collusion and impedes our ability to protect workers, we will use all the tools available to prosecute all of these crimes to the full extent of the law,” he said.

While the government failed to secure the verdicts it was looking for in Jindal and DaVita, it is important not to read too much into these outcomes.

Jindal was the first instance in which the DOJ brought criminal charges over an alleged wage-fixing agreement. And DaVita produced beneficial case law that identified certain non-solicitation agreements as per se violations of the Sherman Act. As Kanter aptly explained: “[b]oth of those cases – which were extremely important cases establishing that harm to workers is an antitrust harm – survived motions to dismiss . . . . The courts said, ‘These are legally sound cases.’ We want those decisions.” Put simply, the government is unlikely to change its strategy of bringing criminal charges against executives in similar cases based on these outcomes.

These verdicts are also unlikely to dissuade private actions concerning similar restraints. Not only do private litigants bringing civil cases face a less exacting burden of proof at trial, but the government’s cases also provide blueprints for defeating motions to dismiss these claims. Further, a high likelihood of defeating a motion to dismiss is typically all that is required to make these actions attractive for private litigants given the high likelihood of settlement following denial of a motion to dismiss and trial.

Coincidentally, the same day the jury returned its verdict in Jindal verdict, April 14, the FTC and DOJ were holding the healthcare installment of their “Listening Forums on Firsthand Effects of Mergers and Acquisitions.” Speakers in the online forum included doctors, nurses, pharmacists, and healthcare advocates. FTC Chair Lina Kahn said anticompetitive mergers and acquisitions harm not only patients, but healthcare workers, too. They are “reducing the employment opportunities for healthcare workers, allowing employers to dictate wages and degrade working conditions,” she said, calling this “a very real harm.” Kahn said testimony underscored the importance of examining the impacts of market concentration on workers and labor markets. She also acknowledged that it took “a lot of courage” for some of the professionals to testify as they “can also face the threats of retaliation.”

According to a report by KaufmanHall, a management consulting firm, 2021 saw a smaller number of deals in the healthcare industry, but that was offset by a higher percentage of large transactions. Eight of 2021’s announced transactions were “mega mergers” in which one of the parties had more than $1 billion in revenue. The firm said 2021 had the largest percentage of mega mergers in the last six years – more than 16%, compared to nearly 9% in 2020. A study of more recent statistics by KPMG reveals that Q1 of 2022 saw a “dramatic downturn” in healthcare deals, citing a slower economy, interest rates and inflation, and the start of the Russia-Ukraine war. “Constrictions in the global supply chain, already severe in the pandemic, multiplied with Russia’s invasion of Ukraine, raised prices, and caused shortages of everything from surgical gloves to exam tables,” the firm said. Private equity funds slowed their healthcare pursuits because they were “discouraged by rising supply and labor costs.” Their interest in physicians’ practices and healthcare IT and analytics “remained steady,” according to KPMG.

Abortion law fights between states are a possible outcome of removing Roe : NPR 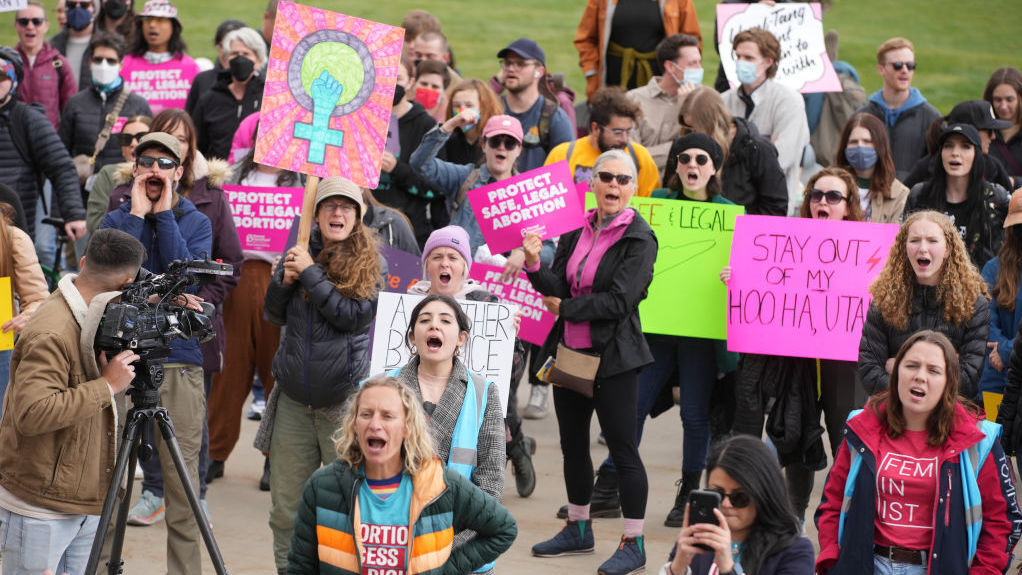