Three Ward and Smith labor and employment attorneys analyzed a number of real-life situations many employers are dealing with in the current landscape.

The attorneys tackled a variety of hypothetical scenarios they could face as General Counsel for ABC, Inc. To begin, the attorneys described how they would respond if the CEO of this fictional company wanted to know about the status of the Occupational Safety and Health Administration’s (OSHA) “vaccination or test weekly” mandate.

A common misconception is that all the vaccination mandates were stayed by the Fifth Circuit. “Instead, that was just the emergency temporary standard (ETS) for employers with 100 or more employees,” Hill said.

The situation is continually evolving. “Just between the time that we wrote this live-action role-playing and started talking about it this past weekend, we’ve seen that change vastly,” added Hill.

In the next hypothetical scenario involving the ABC Company, which has a mandatory vaccination policy, the CEO asks what to do about employee Buster Williams, who refuses to get vaccinated. Prior to the policy’s rollout, Buster had voiced a variety of political and personal reasons for choosing not to get the vaccine.

However, after the policy gets implemented, Buster requests a religious accommodation from getting the vaccine. The CEO wants to know, can Buster be immediately terminated in light of his previous comments about political reasons for not getting the vaccine?

Or, could Buster be banned from the workplace and forced to work remotely, even though he cannot perform all the essential functions of his job from home? Finally, if the previous options were not permissible, the attorneys considered whether ABC could require Buster to wear a mask in the workplace 100% of the time, even though he spends 99% of his day alone in the office with the door closed.

“The information tells us we have reason to believe that Busters does not have a sincerely held religious belief,” Williams commented. Regardless of the sincerity of the request, however, it may be possible to terminate Buster if the employer is unable to provide a reasonable accommodation.

The situation does not include a discussion between the employer and employee to evaluate whether Buster has a sincerely held belief and whether an accommodation can be provided without undue burden. In light of this, Williams says, “It’s more of a knee-jerk reaction to terminate him immediately, not because he’s seeking a religious accommodation, but because of whatever he said previously.”

Immediately terminating Buster has the potential to be deemed retaliatory, so that action should be avoided. But what about forcing him to work from home?

Gray noted, “The ETS was going to say that you either got vaccinated or you had to test weekly and wear a mask indoors, except when you were in a closed office, and briefly while eating and drinking.”

In this situation, Buster is being regulated to his closed office, so the argument could be made that this is a retaliatory action. “Given the right circumstances, let’s say employees are popping into his office every 10 minutes, that might not be retaliatory,” added Gray, with the caveat the correct response would simply depend on the facts.

In many situations, Hill advises employers to go through an interactive process: “Engage with the employee and make sure you go down that path. The answer that you will come to is the most reasonable one.”

Another issue for many employers pertains to vaccines and federal contractors. Unlike the ETS that OSHA put out, the Safer Federal Workforce Task Force mandates that federal contractors that meet the coverage requirements get the vaccine. These employers do not have the option to do weekly testing instead.

“However, if in fact a person does have a legitimate religious or medical reason and requests an accommodation, an employer can accommodate them and exempt them from getting the vaccination,” said Gray.

In this case, weekly testing would be an option, but not the only one. Other options could be reassignment or requiring significant PPE. “This would be very fact-specific and depend upon the circumstances and what worksite they were going to, but yes, there are exceptions for religious and medical accommodations,” added Gray.

The final workplace scenario the attorneys discussed involved ABC hiring Reda Green, a transgender female. Viewing itself as a progressive company, ABC proudly informed its employees it hired a transgender person, but the mass communication offended Reda, who did not want her gender identity disclosed.

Reda complains to the CEO, who wants to know how to rectify the situation. “ABC is going to have to correct this and attempt to make it right in some way,” noted Hill.

Doing nothing would be an incorrect response, and the issue is that ABC treated Reda differently than they would have treated someone else. Throwing Reda a welcome breakfast and asking her to speak would also be an inappropriate response to the situation.

Similarly, a public apology may not be the right choice. Reda has already indicated she was offended by the company disclosing information about her status. “By apologizing publicly for disclosing her status, it’s just keeping that wound open and not allowing it to heal,” said Williams.

An apology is probably warranted, but the best probable strategy would be to speak with Reda first to figure out the best way to make that happen.

Immediately forcing the employees to go through training focused solely on anti-harassment and discrimination against transgender people would also not be a good option. “The problem with that is it puts the situation in the spotlight,” explained Hill. “It further exacerbates the issue of what the company did in the very beginning to offend her.”

Also, Hill pointed out it was not the employees that disclosed Reda’s status, so training would not address the root of the problem. The best option would have been to simply apologize to Reda for disclosing her identity and her status.

As an aspect of the apology, the company should ask Reda if she would like to be a member of the DEI committee, assure her that she was hired because she was the most qualified applicant for the role, and reiterate that the company prohibits any form of discrimination or harassment.

In a hypothetical situation where several female employees complain that Reda is using their restroom and should not be allowed to do so because it is against their religion, the attorneys agreed that the company should engage in an interactive process with the employees.

Whenever someone asks for a disability-related accommodation or a religious-related accommodation, businesses should have an interactive discussion with that person to avoid an adverse finding. The thing to remember is that Reda is entitled to use the restroom of her choice as a result of U.S. Supreme Court case law. 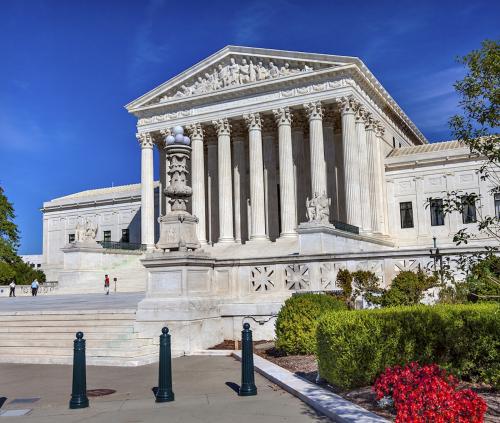