Esperanza Law is aiming to provide a rare service: affordable and quality immigration services in both Spanish and English. The name of the firm, the Spanish word for “hope,” is at the forefront of their work, as they often give hope to clients who have almost nowhere else to turn.

From immigration appeals and naturalization cases to removal defense and asylum cases, the firm handles a wide array of legal situations for people going through difficult situations, usually in a language they do not speak.

“The overwhelming majority of my clients only speak Spanish,” said Tina Colón Williams, a partner at Esperanza. “It’s a ‘I don’t speak English and I have received all this paperwork from immigration and I have literally no idea what it means’ situation.”

For the lawyers at Esperanza, being bilingual is crucial to the work they do for New Haven’s non-English speaking immigrants, as only a limited amount of legal documentation is provided in Spanish. When first entering the country, immigrants may receive some papers on required medical proceedings or lawyers they can contact in Spanish, but not other important documents.

The bilingualism of Esperanza’s lawyers is also valuable to their clients as the burden of finding and using a translator would otherwise fall on them. Williams explained that this is an issue because many of the cases are based on personal difficulties the clients have gone through.

“A lot of the basis of these avenues of relief are based on trauma, really hard awful things that have happened, whether it’s sexual abuse, domestic violence, or something else,” Williams said. “If it wasn’t for our ability to speak in their language, they would have to say it in front of a translator, or a friend that is translating, or a complete stranger.”

According to Esperanza’s website, they offer affordable representation through a “‘low-bono’ business model.” Their services are not pro-bono, or without charge, as revenue is used to keep the business afloat. However, Esperanza is able to make its services affordable, in part, by charging a flat fee by service and not charging by the hour. They also, unlike many other lawyers, do not ask for a several-thousand-dollar down payment, instead offering a monthly payment schedule to their clients. According to Williams, they are also flexible and willing to rework payment plans in a way that works for their clients.

Clients present Esperanza lawyers with a wide array of cases. The lawyers take asylum cases for people afraid of persecution in their home countries, marriage-based cases and detention cases. They also have victim-of-crime cases in which immigrants can seek visas particularly for victims of crimes, whether it is human trafficking or violent crimes in the U.S., and cancellation of removal cases for those with U.S. citizen family members who depend on them and would suffer if they were forced to leave.

Esperanza’s team of lawyers have their own areas of expertise and positions, but also share many of the responsibilities. For example, Williams said she is the default for motions or appeals, while Tess Reagan primarily takes on the affirmative cases, such as filings with the United States Citizenship and Immigration Services. Williams emphasized that much of the credit for the work at Esperanza should go to Yazmin Rodriguez, Managing Partner at Esperanza.

“Yazmin Rodriguez is the managing partner of the firm, she runs the ship,” Williams told the News. “She’ll do a mix of all that, as well as managing the business aspect of it and making sure everything is in order.”

In an email to the News, Rodriguez mentioned several cases that highlight the value of the work done by Esperanza, including that of Nelson Pinos, which brought national attention and coverage from both CNN and the New York Times. Rodriguez also pointed to a second circuit appeal the firm currently has pending. The case, which is being argued by Williams and Jon Bauer LAW ’84 of the University of Connecticut’s legal clinic, is an asylum appeal involving the interpretation of asylum-protection availability for those with dual citizenship. If Esperanza is successful, there would be an important change in available protections for dual citizens worldwide.

“We’ve had this case for almost a decade at this point, and this fight is such a testament to the power of zealous legal advocacy on behalf of our clients in this field,” Rodriguez said. “Not taking denial as defeat, but rather as an invitation to change these incredibly archaic and inhumane rules.”

Esperanza’s work has been received with appreciation from the community and their clients. One client, Jorge H., said in his review of the firm that Rodriguez fought for his family as if they were her own, and thanks to her work they are now able to live in the U.S. peacefully.

Despite past successes, Williams and Rodriguez expressed that there is significant progress that needs to be made in the field of immigration law.

Williams explained that unlike criminal defendants, people in the immigration system do not have any right to a lawyer. Rodriguez argued that while comprehensive immigration reform is essential, it is also not likely to arrive anytime soon. However, Rodriguez said that smaller reforms such as guaranteed right to counsel for minors in removal hearings, intentional diversification of the bench, and Temporary Protected Status for people of countries known to be in crisis could and should be made.

“This system already takes so much dignity away from the people navigating it,” Rodriguez said. “Make sure to treat people with the dignity, respect and autonomy they deserve, rather than treating them as charity cases — they are survivors, people of courage, fighters and they deserve to be treated as such.”

Tue Mar 15 , 2022
From her second-floor office window in Medford, Oregon, elections administrator Chris Walker vividly remembers reading the unsettling words painted in big white letters on the parking lot below in late November 2020: “Vote don’t work. Next time bullets.” Her heart sank, she recalls, wondering whether or when the threat would […] 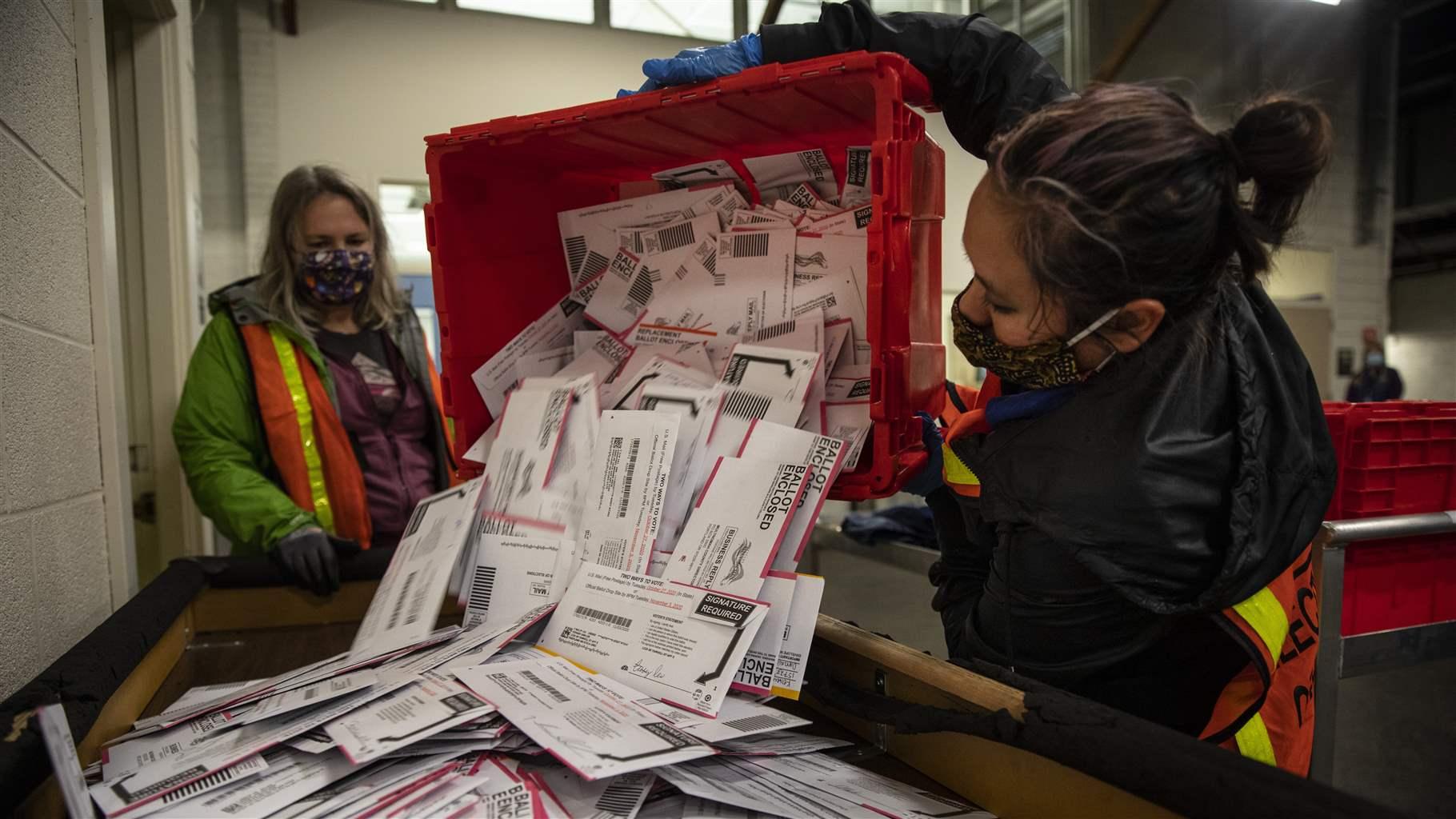