“Election subversion in 2024 is not going to be a mob storming the Capitol, it’s going to be a county clerk in Michigan or a supervisor of elections in Florida who decides to fuck the whole thing up,” Litman said. “The only way to make long-term democracy protection is by electing people who will defend democracy.”

The program will include every state where election administrators are themselves elected by voters. It represents one of the boldest organized attempts to put Democratic-backed candidates in these positions, in response to Trump’s endorsement for various election positions of followers who subscribe to conspiracy theories that the 2020 election was stolen. Other Republicans are organizing around these offices as well, including former Trump aide Steve Bannon, who has urged Trump backers and 2020 election deniers on his podcast to get involved in party politics and “take this back … precinct by precinct.”

Run for Something is working in coordination with other Democratic groups on “Clerk Work.” Partners include American Bridge, a Democratic group that compiles and shares opposition research, and Open Democracy PAC, a super PAC that’s spending on advertising to boost these candidates.

“There’s clearly an effort on the right, and there needs to be a clear effort on the Democratic side as well,” said Stephanie Schriock, former president of EMILY’s List, another Democratic group focused on recruiting and supporting pro-abortion rights candidates who run for office. “This is the moment to go big on this.”

So far, Litman said they have raised nearly $6 million for the push, after quietly kicking off fundraising in late 2021. She described donors she and Morales Rocketto have spoken to as “really receptive,” but added: “I think they are missing the urgency.”

A pitch memo to donors emphasizes that “early support has an outsize impact as we race to recruit good candidates before it’s too late.”

“The left is decades behind in investing in the local infrastructure needed to fight back against emerging anti-democracy forces on the right,” the memo continues. “Taking over our election administration infrastructure at the local level is our last best option. If we want to win, we need to go big quickly.”

One donor adviser, who has met with Run for Something’s founders, said the project was “filling a role in the Democratic ecosystem that no other group or committee is doing.”

Privately, some Democrats have grumbled that Run for Something is filling a void left by a lack of action on the part of the Democratic National Committee and state parties. “It’s almost a travesty this has to be done because they should be doing it, but they’re not,” said one Democratic operative involved in these efforts, granted anonymity to discuss the issue candidly.

Much of the pitch builds off of Run for Something’s five years of experience supporting local candidates from campaign launch to Election Day. The group offers logistical support, like how to file campaign finance paperwork, as well as templates for campaign strategy. Run for Something also connects candidates with mentors, as well as other current candidates, to create a sense of community around running for office.

So far, they’ve notched a 42 percent win rate for their endorsed candidates, supporting 639 winning candidates over the last five years.

“It’s so helpful you have mentors you can call on or people to ask silly questions about how to format this document or where to file this paperwork. Just the logistics can be a barrier of entry, if you’re a new candidate,” said Amanda Gonzalez, a first-time, Run for Something-endorsed candidate for clerk of Jefferson County, Colo. “There aren’t always resources at this level, so it’s hugely important to have an organization that gets it.”

To draft candidates into these positions, Run for Something has already been airing digital ads with taglines like: “Your future is calling: The deadline to run for office in Montana is March 14,” or “Ready to make a difference?” But it’ll also involve heavy on-the-ground recruiting through staffers, who will actively seek out potential candidates.

For example, in McLean County, Ill., a Democratic candidate for county clerk cited Run for Something’s recruitment as the reason why she decided to challenge a three-term GOP incumbent, who was initially running unopposed.

Run for Something started a pilot program in late 2021, spending $1 million to recruit candidates for 50 election offices across the country. Of the 40 that already had filing deadlines, the group was able to put forward a Democratic candidate in just over half of them.

Another example of what the spending might look like came out of Wisconsin’s local spring elections. Open Democracy PAC spent money on digital ads and phone calls to boost 14 candidates, nine of whom won. Many were seeking local positions that have a hand in election administration.

There is some concern that getting involved in these races, some of which are nonpartisan, will politicize positions that have not traditionally gotten sucked into that framework. But “the reality,” Litman said, “is that the Republican Party has made democracy into a partisan issue, so we don’t have a choice.

“We’re going to be cognizant of where our public engagement with candidates is going to look different, where our endorsement is helpful versus where we should be behind the scenes,” Litman continued. “I wish we didn’t have to.”

Tue Apr 19 , 2022
Chicago, April 12, 2022 (GLOBE NEWSWIRE) — Norton Rose Fulbright today announced that the global law firm is expanding to Chicago as its 12th US location and 53rd office worldwide. Norton Rose Fulbright will be the first major law firm to base itself in Chicago’s vibrant Fulton Market District. The […] 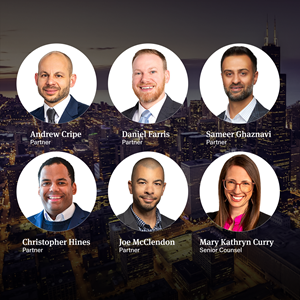