An international panel of human rights experts on Friday called on Taiwan to end the “cruel and degrading” practice of capital punishment.

In its Concluding Observations and Recommendations report, the nine-member group said it was “extremely disappointed” at the failure of the government to address the issue, despite persistent calls in Taiwan for the abolition of the death penalty.

While Taiwan has substantially improved its human rights record over the years, some long-standing issues, such as the continued use of the death penalty, remain inadequately addressed, Austrian human rights lawyer Manfred Nowak told a news conference in Taipei.

“Taiwan is already among a very, very small number of countries in the world that still retain the death penalty, and the arguments that are time and again repeated by the government are far from convincing,” said Nowak, who was the UN special rapporteur on torture from 2004 to 2010.

“We are strongly appealing to the Executive Yuan to immediately declare a moratorium on executions,” he said, adding that the “cruel, inhuman and degrading” punishment contravenes articles 6 and 7 of the ICCPR.

All death sentences should be commuted immediately and the minister of justice should no longer sign execution orders, he added.

Taiwan has the potential to become the Asian standard-bearer in recognizing and enforcing international human rights, but it will never achieve that so long as the death penalty remains an element of its criminal justice system, he said.

Cabinet spokesperson Lo Ping-cheng (羅秉成) said that the government remained committed to gradually abolishing capital punishment, but there is a lack of public consensus on the matter.

The government has taken note of the suggestions made by the international human rights experts and would convene to discuss the feasibility of declaring a moratorium on executions, Lo said.

Taiwan most recently executed a prisoner in 2020.

The 38 people currently sentenced to death have brought the issue to the Constitutional Court, and have received a legally guaranteed stay of execution, he said.

The panel’s report also highlighted the absence of legislation to curb torture and discrimination in Taiwan.

“The information provided by the government clearly shows that there are many allegations of torture against law enforcement officials in Taiwan,” the report said, adding that those cases only led to disciplinary action instead of criminal prosecution.

The nation has yet to make incorporate torture — the crime of inflicting severe mental or physical pain or suffering on a powerless person for a particular purpose as defined in international law — into its Criminal Code, Nowak said.

Taiwan should adopt a “comprehensive anti-discrimination law that addresses the various types of discrimination,” which could be applied to the public and private sectors, he added.

At a news conference outside the Ministry of Justice building in Taipei, Huang Yi-bee (黃怡碧), who is chief executive of Covenants Watch — which was formed by a coalition of non-governmental organizations determination to introduce a comprehensive anti-discrimination law — said that the government commissioned academics to research the issue, but has not responded to local groups’ requests for consultations.

Although not a UN member, Taiwan ratified the ICCPR and ICESCR as a matter of domestic law in 2009.

Since 2013, the government has invited human rights experts to Taiwan every four years to review the country’s implementation of the covenants and interact with government officials and representatives of non-governmental organizations before issuing their observations and recommendations.

Comments will be moderated. Keep comments relevant to the article. Remarks containing abusive and obscene language, personal attacks of any kind or promotion will be removed and the user banned. Final decision will be at the discretion of the Taipei Times.

Tue May 17 , 2022
SAN DIEGO (Border Report) — Innovation Law Lab, an immigrant advocacy organization, and a family from El Salvador filed a motion to intervene in a federal lawsuit over the Biden administration’s order to end Title 42. It comes on the heels of a federal district court judge issuing a temporary […] 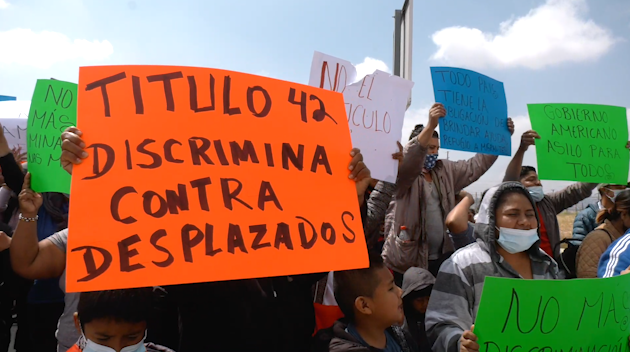