Police do not have to — and should not — advise crime suspects that their cooperation could impact their immigration status, a New Jersey appeals court ruled Friday.

Superior Court Judge Richard J. Geiger, writing for a three-judge appellate panel, agreed with a lower court’s ruling that a Miranda warning, in which police advise suspects of their rights to remain silent and get an attorney, is sufficient protection for people being interrogated.

“Law enforcement officers cannot and should not be expected to accurately predict the immigration impact of a suspect’s statement on potential charges that have not yet been filed,” Geiger wrote.

Given the inherent unpredictability of immigration enforcement decisions and shifting federal policies, law enforcement officers act at their peril — and may endanger the admissibility of an otherwise knowing and voluntary confession — by predicting or commenting on whether an interrogee may be deported, he wrote.

The decision arose from an appeal by Nestor Francisco, an undocumented immigrant from the Dominican Republic who was convicted of a 2015 murder in Newark.

Stefan Van Jura is the assistant deputy public defender who represents Francisco. He said he will petition the state Supreme Court to review the case, but he declined to comment further.

A spokesman for the Attorney General’s Office declined to comment.

Francisco did construction work for a couple in their Newark building and killed Charles Jeffrey, the elderly husband, after the couple accused him of stealing jewelry and shoes, court documents say.

When police first identified Francisco as a suspect, a Newark police detective read him his rights in Spanish, his native language, and Francisco waived his right to an attorney and agreed to talk to investigators, according to court paperwork.

Early in the hourlong interrogation, Francisco voiced concerns about his undocumented status, and a detective told him: “Your status has nothing to do with this. I am not going to ask questions on your status, or how you got here to this country. Absolutely nothing.”

Francisco then admitted his involvement in the slaying but claimed self-defense. A grand jury later indicted him, and at trial, a jury rejected his self-defense claim and convicted him of murder, weapons offenses, robbery, and tampering with evidence.

A judge sentenced him to 50 years in prison, and federal immigration authorities lodged an immigration detainer against him.

Francisco appealed his conviction and sentence, saying detectives misled him that his cooperation wouldn’t impact his immigration status and his statements to police consequently should have been inadmissible.

But in Friday’s ruling, Geiger affirmed both the conviction and sentence, saying Newark police correctly read Francisco his Miranda rights and Francisco knowingly, intelligently, and voluntarily waived those rights before making his statement.

Geiger cited the state attorney general’s 2018 immigrant trust directive, which prohibits police from sharing information with federal immigration authorities, as another reason why police shouldn’t address immigration with suspects. Police cannot give suspects immigration advice because, due to the directive, they receive little to no training on immigration law, Geiger said.

If suspects raise immigration concerns, officers can only remind them that police can’t give legal advice and that interrogees have the right to an attorney, Geiger added.

“The only sure way to avoid giving incorrect information or advice is to give no advice at all concerning immigration status or consequences,” Geiger wrote. “The point simply is that the best way to safeguard an interrogee’s constitutional right to remain silent is for police interrogators to remain silent as to federal immigration law and enforcement practices.”

GET THE MORNING HEADLINES DELIVERED TO YOUR INBOX

Sun Apr 10 , 2022
Gov. Kay Ivey of Alabama signed legislation on Friday that prevents medical professionals from providing care that aids transgender young people in transitioning, adopting some of the country’s most restrictive measures and threatening doctors and nurses with up to 10 years in prison. Ms. Ivey, a Republican, also approved legislation […] 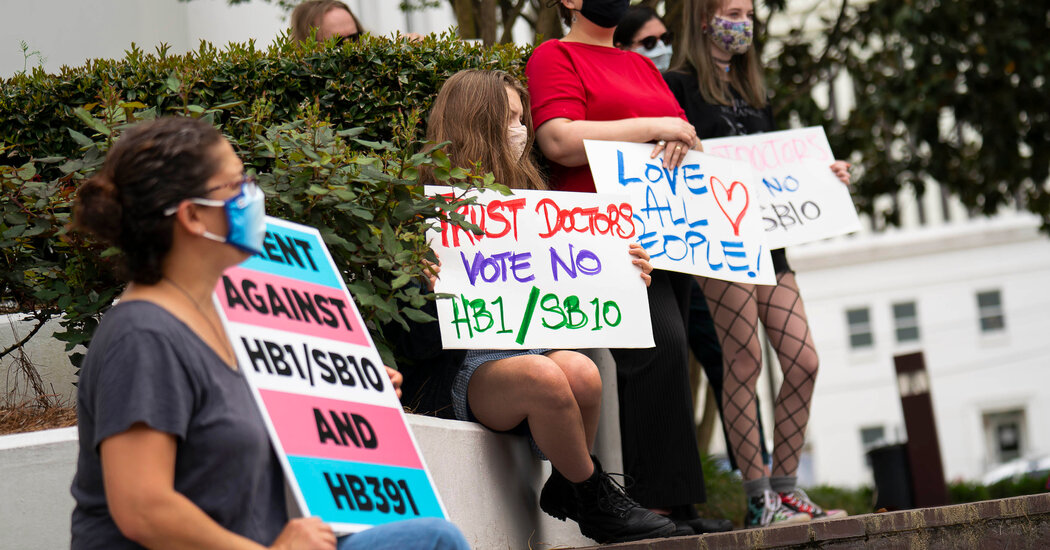