Immigrants who have legal representation are far more likely to win permanent resident status or become U.S. citizens. But finding — and affording — an immigration attorney in Colorado is tough, especially on the Western Slope where only a few operate full-time.

It’s especially challenging for people who have complicated cases or have sought help from unlicensed individuals who take advantage of immigrant communities.

“You don’t just walk up to a window and get in line,” said Jennifer Smith, an immigration attorney in Glenwood Springs. “It is a messy, complicated, outdated, unworking system that is not easily managed by someone without a law degree.”

Ana, a DACA recipient who lives on the Western Slope, and her brother-in-law, who is undocumented, have winding roads to permanent status. Ana, who asked that her last name not be used, might have an easier time of it. But her brother-in-law, who has lived in Colorado for 18 years and was recently jailed on criminal charges found to be false, can’t apply for permanent status because he has been deported twice.

His last option is to try for a U visa, which means he was the victim of a crime. That would first require a civil suit to prove that the woman who falsely accused him lied to the police. But his family has had trouble finding a lawyer to take the case.

“It’s just hard, because we don’t understand the system, the legal system, and it’s just a different language,” Ana said.

While Ana’s brother-in-law might have extreme roadblocks to securing legal status, his language barrier is a common challenge for Coloradan immigrants who want to gain legal status. Add into that the high cost of immigration attorneys in a state where that number is notably small compared to other practices, especially on the Western Slope where their family lives. Throw in government backlogs, like receiving a work permit in two years when it used to take three months, Smith said.

Even finding trustworthy information can be hard. Many immigrants are lured by the lower prices of both well-meaning and malicious notaries, or “notarios,” individuals who offer legal advice and submit documents in violation of Colorado law.

“With this accelerated amount of people coming increasingly to work and to live in Colorado, especially in rural places, the community experienced the lack of legal resources, lack of attorneys in general,” said Ricardo Perez, the executive director of Hispanic Affairs Project, or HAP, an organization that serves immigrants in Western Colorado.

“The agricultural and ranching communities would collapse without immigrant labor,” Imelda Mulholland, an immigration attorney in Grand Junction, said in an email.

Mulholland does not advertise her practice beside a website. All her clients are from referrals. She offers an interpreting service for an additional cost. And yet the solo practitioner frequently sends cases to other immigration attorneys because she’s at full capacity.

“Most immigrants do not know the legal landscape that governs their rights to immigration benefits,” Mulholland said in the same email. “They may trust a friend who ‘went through the process’ but the facts of their case may be different, putting them in a minefield of inadmissibility issues that might land them in removal proceedings.”

Western Colorado has long had large pockets without any attorneys, not just when it comes to immigation, said Emy López, a director at the Colorado Bar Association. And while remote attorneys are an option, she said the virtual format is not always the right solution.

“The trust that exists with someone in person is completely different, especially in something so tense, so stressful as an immigration proceeding,” López said.

The Colorado Bar Association connects people with organizations in areas with gaps of attorneys that offer legal services, such as HAP. The organization offers legal consultation to more than 300 individuals and directly represents around 150 immigrants each year, Perez said. The federal government allows nonprofits to provide immigration services for low income families as accredited representatives. HAP only takes on simple cases and connects formerly deported or arrested immigrants to attorneys.

Marketa Zubkova is the organization’s accredited legal representative. She’s not allowed to represent individuals in front of a judge because she only has partial accreditation. But the organization can work on naturalizations, DACA renewals, green card renewals, adjustment of status applications and consular processings.

“[The notarios] do the forms with the people, many times incorrectly, and then the people are on their own,” Zubkova said. “And that’s when they come to us, when the case or the client is in trouble.”

Using a notario can seem like a good idea. They could speak the same language and seem more trustworthy than an attorney. They could operate closer to home when attorneys are only accessible through reliable internet access. They could offer lower prices than attorneys, who Smith said typically charge at least $5,000 for most basic services and much more for a case that goes to immigration court.

But there’s sometimes a darker side to the savings and convenience notarios offer.

In many Latin American countries, a notario is an attorney or a person who can otherwise provide legal assistance and representation. In the U.S., a notary administers oaths and is a witness for signing documents, but is not allowed to represent a client. Even though it’s illegal in Colorado, notarios sometimes take advantage of this misunderstanding to scam immigrants.

“Many times they destroy the opportunity for individuals, immigrants and refugees to fix their immigration status,” Perez said.

Notarios often take large amounts of money from immigrants and fall short on their promises. They operate in both rural communities and in the cities, where Smith said sometimes the problem is even worse.

Notarios have filed for asylum on behalf of an individual without telling them, then disappear before removal orders are issued, leaving behind a mess that takes decades to fix. Some have skipped important steps for a consular interview, leaving immigrants stranded in their home countries, or tried to send them for an interview when their case didn’t require leaving the U.S.

One woman spoke to Mulholland after she was blackmailed by a notario who said he would report her unless she kept paying for assistance that he had no intention of providing.

“Notarios have no knowledge of the law, give ‘legal advice’ that is often erroneous with dire consequences,” Mulholland said over email. “I cannot count the number of immigrants who used notarios from the Western Slope that have ended up in Mexico for a consular interview only to find they are barred for 10 years from coming back to the U.S.”

Some notarios are well-meaning and try to help individuals who can’t afford attorneys, but put immigrants at a bigger risk because they don’t understand the ins and outs of immigration law, Smith said. It’s about more than just filling out a form because every response has a massive legal impact.

“Some of [the notarios] will actually sign the immigration form and file it with Immigration with their name on it,” Smith said. “I know they’re seeing the same names over and over again.”

Of course, attorneys aren’t the only people who can help an immigrant through the legal system. But legal representatives like Zubkova have to show proof of continued training and online classes every time they renew their accreditation. Attorneys are not always the answer for all immigration services, but they are the right choice with anything involving a legal process, López said.

“It’s kind of like having a doctor,” López said. “You’re gonna have one surgery. You want to make sure that it’s someone who’s done it before and who knows what they’re doing. Because some of these things can be life-altering.”

We believe vital information needs to be seen by the people impacted, whether it’s a public health crisis, investigative reporting or keeping lawmakers accountable. This reporting depends on support from readers like you.

Tue Jun 21 , 2022
A sign is seen near the Stormont Parliament Buildings on the day Britain is expected to publish a bill to unilaterally scrap some of the rules governing post-Brexit trade with Northern Ireland, as its dispute with the European Union over the protocol has not yet been resolved, in Belfast, Northern […] 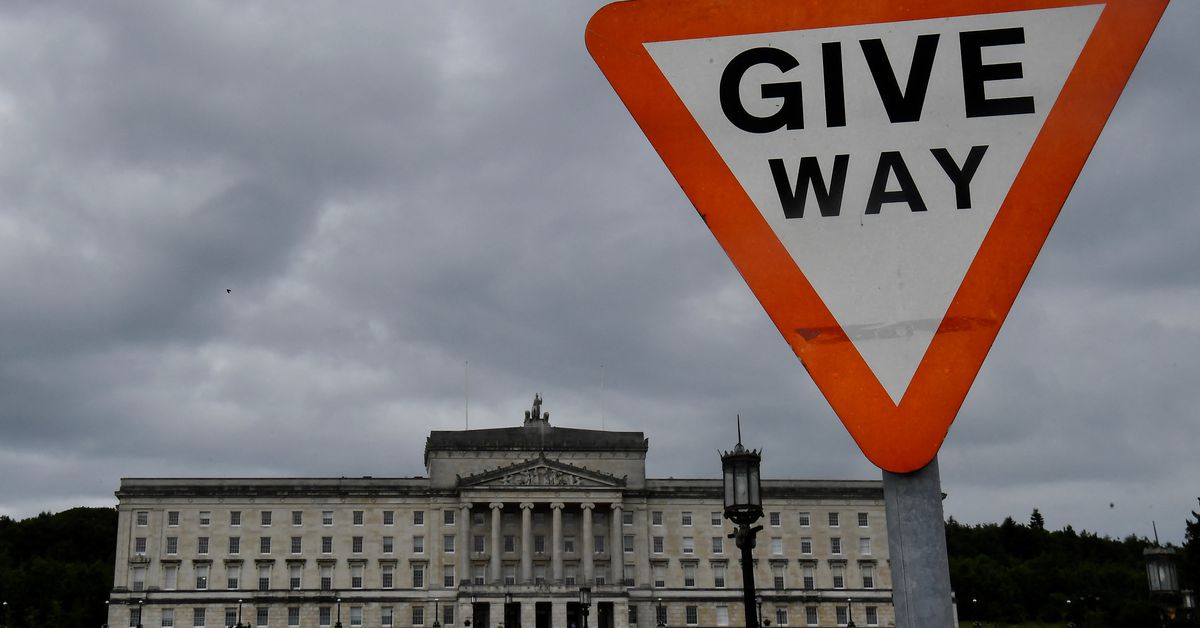