The writer is a retired U.S. immigration judge.

Twenty-nine years ago, as a Justice Department lawyer advocating the U.S. Attorney General’s position in an immigration case, I stood before a distinguished panel of the Fourth Circuit Court of Appeals and argued in favor of a man’s deportation from the United States. The man in that case was the recipient of a probation before judgment, entered by a Maryland state court judge.

Even though he was not considered to have a conviction under Maryland law, I persuaded the court that he still stood convicted under federal law. In Maryland criminal cases, first-time offenders and individuals charged with minor offenses are often given “probation before judgment,” wherein they are not convicted but rather given a period of probation.

For U.S. citizens who successfully complete their probation, a PBJ has no further consequences. For noncitizens, however, the consequences are far more dire, as many convictions render noncitizens deportable from the United States and do, in fact, result in deportation and a permanent separation from U.S. citizen family members including spouses and children.

My argument in that federal circuit court case resulted in a final order of deportation and resulted in a binding decision that now affects every Maryland noncitizen with a PBJ who is summoned to appear before an immigration court.

Because of a quirk in the language in the Maryland PBJ statute, the only result that the court could have reached at the time was the conclusion that the man had a conviction under federal law, notwithstanding the fact that a state court judge had already deemed him to be both worthy of probation and a successful probationer without a conviction.

Looking back over an almost 36-year career in the immigration field, which includes time as an INS prosecutor, as a former Civil Division Justice Department attorney, and more than 20 years as a U.S. immigration judge before my retirement, it has become clear to me that not every “win” on the law is a win for justice.

For justice to win, there must be fundamental fairness for everyone who is subject to our laws, regardless of citizenship status. Fairness includes the honoring of expectations and promises made to people who appear in our courts of law.

While our state statute clearly provides that people who successfully complete their probationary period do not have “a conviction for the purpose of any disqualification or disability imposed by law because of conviction of a crime” (Md. Code, Crim. Proc. § 6-220), the current disconnect between our state PBJ statute and the federal immigration law essentially results in a “bait and switch,” a situation that is profoundly unjust.

As a sitting immigration judge, it was painful to issue deportation orders against Marylanders with PBJs because they had benefitted from probation in Maryland and not, for example, in Virginia, where the legislature has more precisely drafted its PBJ statute such that its noncitizens are not deportable under federal law.

The time for legislative action is long overdue.

Once again, our state legislature has the ability to amend the PBJ statute in a manner that would require the federal government to give full faith and credit to the legislative intent behind the statute and would enable federal jurisdictions to recognize the discretion, power and authority of our state court judges.

The proposed, simple revision of the Maryland PBJ statute would remove the grant of a Maryland PBJ from the federal definition of conviction in the immigration statute and would result in fairness, consistency and a “win” for justice.

I urge the Maryland General Assembly to pass House Bill 559/Senate Bill 265 to ensure justice for all.

Judge Lisa Dornell: Not Every ‘Win’ Under the Law Is a Win for Justice

How to Manage and Avoid Lawyer Burnout

Fri Feb 4 , 2022
Tuesday, February 1, 2022 Chances are that being an attorney suits you, otherwise, why on earth would you have pursued this profession? Yet, after a few years of overwhelming piles of documents, never-ending emails, back-to-back consultations, finding your own clients, doing your own marketing, and ardently defending your clients in […] 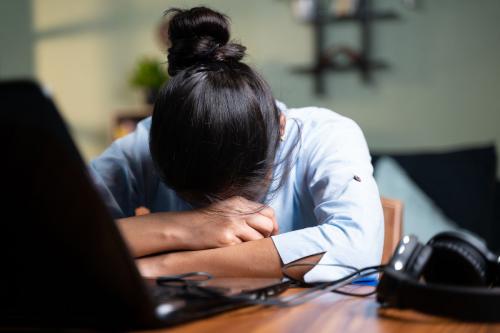