The likely moderation of U.S. job growth in coming months will reflect a combination of hiring challenges in a remarkably tight labor market, shifts in spending patterns and outright soft spots within a handful of industries.

Some sectors, such as travel and entertainment, are expected to make up a large share of aggregate payrolls growth as Americans allocate more of their discretionary income to services.

But Federal Reserve interest-rate hikes, recession concerns and tighter financial conditions suggest an eventual hiring slowdown in some of the industries that experienced the sharpest job growth over the last two years. Employment in some areas, particularly housing, are at risk of weakening later this year and next as borrowing costs climb.

“I think looking at the aggregate numbers tells you one sliver of information, but you have to dig into the details to have the full story because the economy is in a very different place depending on what sector you’re looking at,” said Michelle Meyer, U.S. chief economist at Mastercard Economics Institute.

While the composition of employment has shifted in the last two years, the U.S. has now recovered 95% of jobs lost during the first two months of the pandemic. And the unemployment rate is now within striking distance of matching the lowest level since 1969.

Friday’s employment report is projected to show the economy added about 325,000 jobs in May — healthy, but still the smallest in a year.

In addition to less hiring in residential construction, an ongoing rotation in consumer demand from goods into services “likely reduces the need for jobs in sectors such as transportation and warehousing,” Bloomberg Economics said. But leisure and hospitality, which remains 1.4 million jobs short of pre-pandemic levels, should experience strong job growth as the sector continues to recover.

At the same time, the technology industry, which thrived during the pandemic, is beginning to lose some investor interest. Venture-backed startups as well as public companies such as Netflix Inc. have either cut jobs, instituted hiring freezes, or both.

A report from ADP Research Institute Thursday showed that employment at both construction and information firms contracted in May, possibly an early sign of softness in those industries. Separately, data from the Labor Department showed applications for U.S. unemployment insurance fell last week, holding at a historically low level.

“It’s less about filling the hole that was created from the pandemic and it’s more about finding this new equilibrium in the economy where there is the right amount, the right matching between where the jobs are and where the people are in terms of looking for those jobs,” Meyer said.

Meantime, the large mismatch between labor demand and supply has driven worker pay higher over the last year, but strength in some industries and weakness in others may ultimately mean a divergence in wage growth, she said.

After many months of hefty wage increases, some companies are becoming more cautious when it comes to salary increases as they grow concerned about profit margins at the same time materials costs climb. Friday’s jobs report is expected to show annual average hourly earnings growth of 5.2% in May after 5.5% a month earlier.

“Sectors of the economy that still have this very strong demand for workers and some limitations of supply, wage growth is still going to be increasing at a healthy clip,” Meyer said. “And in others, where job vacancies are coming down, they’re closer to kind of healing, wage growth is presumably going moderate.”

So far, the job openings data show few signs of breaking lower. The Labor Department on Wednesday said vacancies eased to a still-elevated 11.4 million in April from a record 11.9 million a month earlier.

Financial conditions related to higher rates and stock market performance may also weigh on the labor market in the second half of this year. The number of comments in earnings calls about labor shortages appear to have peaked, while “layoff,” “hiring freeze” and “overstaff” mentions ticked up from historical lows, according to an analysis by Bank of America Corp.

“The tightening of financial conditions you’ve seen over the past six months — the pretty sharp tightening — and stock prices being down 20% or so with rising credit cost, that’s certainly going to put a chill on hiring,” said Brett Ryan, senior U.S. economist at Deutsche Bank AG.

To some extent, job growth — whether or not there’s a sharp economic downturn — is expected to slow given the low level of unemployment and expectation that the participation rate may not return to its pre-pandemic peak.

“I think that the demand is still there, but demand is peaking probably,” Ryan said. And it’s likely “to shift lower over the next year or so.”

Copyright 2022 Bloomberg. All rights reserved. This material may not be published, broadcast, rewritten, or redistributed.

When Can I Sue My Lawyer in Texas?

Mon Jun 6 , 2022
It is not uncommon for an attorney to execute all or part of his or her client’s wishes, which may be in breach of a fiduciary duty owed by the client to a third party. The third party can certainly sue the client for breaching fiduciary duties. But can the […] 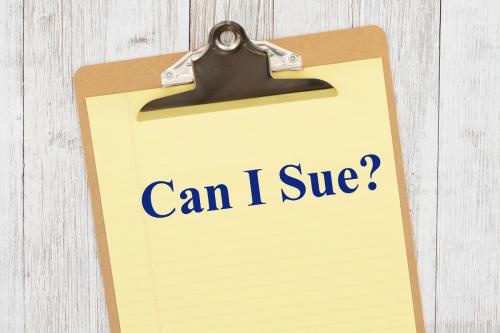