The report also shows that, thanks to its flexibility, Cohesion policy provided much needed and very swift support to Member States, regional and local authorities in the midst of economic slowdowns and the worst crisis of recent times.

The new 2021-2027 Cohesion policy programmes will continue to invest in regions and in people, in close coordination with the financial firepower of the NextGenerationEU package.

Members of the College said:

Commissioner for Cohesion and Reforms, Elisa Ferreira, said: “The 8th Cohesion Report clearly shows the importance of Cohesion policy in fostering convergence and reducing inequalities between countries and regions in the EU. By mapping the areas where Member States and regions need to do more and better, the report allows us to learn from the lessons of the past to be better prepared for the challenges of the future. We need to accelerate the adoption and implementation of Cohesion policy programmes for 2021-2027 so that we can continue supporting regions in recovering from the pandemic, reap the full benefits of the transition to a green and digital Europe and deliver on long term growth”.

Commissioner for Jobs and Social Rights, Nicolas Schmit, added: “The pandemic has increased the risk of inequalities in the EU, and Cohesion policy is one of our main tools to combat this trend and invest in people. It helps us to meet the objective of building a strong social Europe that is inclusive and fair. I am proud that thanks to EU funds, disadvantaged children receive books and computers; young people are offered apprenticeships to get them into the labour market; and vulnerable people have access to a warm meal and care.”

Cohesion policy has made a difference for many EU regions and people. It has helped them invest in a more sustainable and balanced growth, with long term benefits. It has supported physical and digital infrastructure, education and training, SMEs, and the green transition.

More recently, Cohesion policy has helped EU regions face the challenge of the coronavirus pandemic and its consequences. The two support packages launched in spring 2020 (CRII and CRII+) offered immediate liquidity, made spending more flexible, increased the co-financing rate to 100% and extended the scope of the EU Solidarity Fund.

As part of NextGenerationEU, REACT-EU provided an extra €50.6 billion to support the recovery from the pandemic allowing regions and cities to continue investing in their growth while preparing the 2021-2027 programming period. It has also provided a much-needed safety net to vulnerable persons whose situations have become even more precarious as a result of the pandemic.

Over the next years, Cohesion policy will continue to enhance a fair and sustainable development in all EU regions, while supporting the green and digital transition through:

The 8th Cohesion Report will feed the discussions at the upcoming Cohesion Forum (on 17-18 March), which brings together representatives of EU institutions, national, regional and local authorities from all Member States, social and economic partners, non-governmental organisations and academia. The Forum will debate how Cohesion policy can ensure that no region is left behind in the ongoing structural changes, and that all regions can reap the benefits of the green and digital transitions.

Every three years, the Commission publishes a report on the economic, social, and territorial cohesion in the EU, presenting the progress and the EU’s role as a driver for regional development. It analyses the evolution of cohesion in the EU according to a wide range of indicators, such as prosperity, employment, education levels, and accessibility and governance.

On the basis of facts and figures, the Report offers a snapshot of the state and evolution of EU regions’ development, and the challenges they are facing. The Report assesses whether disparities between regions have decreased, who is leading and who needs to catch up in innovation, employment or institutional capacity, for example. It also shows where regions stand in the green and digital transition and who needs further support. A clearer picture of what has been achieved and what still needs to be done in the 2021-2027 programming period will guide EU policies and investments to help regions achieve a balanced and sustainable long-term growth.

Is 2022 the Year for Federal Cannabis Reform?

Sat Feb 12 , 2022
Friday, February 11, 2022 Hope soared with the possibility of federal cannabis reform in 2021.  And for good reason –  the induction of a new, more liberal administration, rapid state-level legalization, broad support by Americans,[1] and growing bipartisan backing led many to believe that 2021 was going to be the year […] 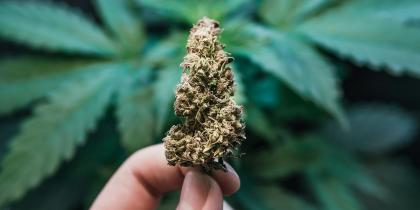