Then came Jan. 6, 2021, and Jacob found himself rushing through the US Senate chamber to a secure location as rioters stormed the Capitol.

Jacob, Vice President Mike Pence’s top lawyer, had gone for a cup of coffee in the Capitol basement when he and other Pence staffers heard glass shatter and a mob pushing its way into the building. They were quickly ushered by police and Secret Service through the Senate chamber to a secure location, where they joined Pence and members of the vice president’s family.

As he dashed, Jacob tapped a furious message to John Eastman, a lawyer for President Donald Trump: “Thanks to your bull—-, we are now under siege.”

So began an unexpected turn of events for a lawyer then best known for his grasp of intricate pension and health plan requirements. Jacob has since emerged as a prominent Republican foil of a Trump election narrative pushed by lawyers like Eastman, Rudy Giuliani and Sidney Powell.

“He’s not someone who has ever sought the spotlight,” said Marc Short, Pence’s former chief of staff. “Greg is unassuming, incredibly diligent and loathe to shoot from the hip.”

Now back at his old law firm in Washington, O’Melveny & Myers, Jacob has detailed Eastman’s efforts to convince Pence to overturn the election in the days leading up to the Capitol attack.

He testified in February before the House committee investigating the riot, and he has talked with state bar officials in California considering disciplinary action against Eastman.

The spotlight is set to get bigger for Jacob, who declined to comment for this article, later this month. He’s slated to appear as a witnesses at a June 16 hearing, part of a series of nationally televised sessions in which the committee says it will lay out the plot to overturn the 2020 election and prevent the transfer of power.

It’s quite the detour for a lawyer who at the start of the Trump administration had a different goal in mind — a career job at the Labor Department.

Jacob was the Labor Department solicitor, the agency’s top legal role, during the George W. Bush administration. He again set his sights on the department when Trump became the first Republican elected president since Bush.

Jacob—then at O’Melveny—participated in “murder boards” prepping Trump’s Labor picks to go in front of the Senate. He later applied for a career deputy solicitor position at the department, according to four former Labor officials who spoke on condition of anonymity.

Pence’s top lawyer, Matt Morgan, told the vice president in early 2020 that he was leaving the role to return to Indiana. Morgan suggested Jacob as a possible replacement, according to Short and other Pence staffers.

A.B. Culvahouse, an O’Melveny partner who was White House counsel for President Ronald Reagan and U.S. ambassador to Australia under Trump, enlisted Jacob for the job.

Culvahouse is also known for leading the search that landed Sarah Palin on the 2008 Republican ticket with Arizona Sen. John McCain.

O’Melveny has been a revolving door for government officials on both sides of the aisle. Former partners include Warren Christopher, who served as secretary of state under President Clinton, and Clinton solicitor general Walter Dellinger.

O’Melveny lawyers defended Trump in a lawsuit over the now defunct Trump University, which ended when the former president agreed to pay $25 million to former students accusing him of fraud. The firm also advised Trump’s inaugural committee in an investigation into the group’s spending.

Jacob, a devout Christian who volunteers helping child abuse victims for a local nonprofit group, seemed like a perfect fit for Pence’s staff.

“He shares Vice President Pence’s world view and aligned with our office incredibly well,” Short said. “He provided a certain level of maturity to the office.”

Friends and colleagues call Jacob “humble,” “careful,” “under the radar” and “not exactly Mr. Social.” He’s an avid “Settlers of Catan” player who has written lengthy law review articles on the Constitutional plot line holes in television dramas “The West Wing” and “24.”

He landed the job on Pence’s staff just eight months before the Capitol riot.

Jacob and Eastman ran in similar legal circles for decades, but they’d never met until two days before the attack.

Eastman graduated from Chicago law school in 1995. Jacob started at the same school a year later.

Both men worked as law clerks—Jacob for Jacques Wiener on the federal appeals bench in New Orleans, and Eastman for Supreme Court Justice Clarence Thomas and appeals judge Michael Luttig.

Luttig has also been asked to appear at a hearing, according to an Axios report.

The two have been active in the conservative Federalist Society and worked at major law firms—Eastman at Kirkland & Ellis in Los Angeles and Jacob at O’Melveny and Winston & Strawn in Washington. 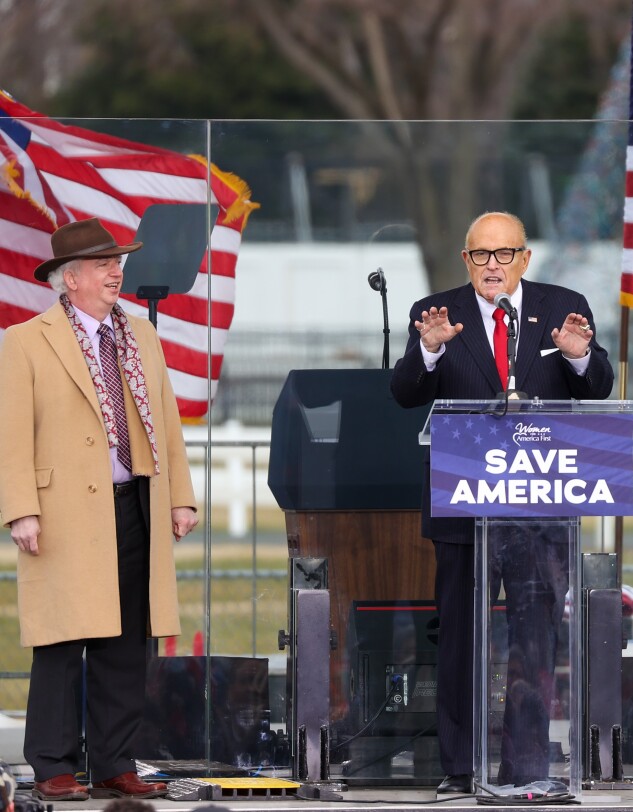 John Eastman stands by Rudy Giuliani at a “Save America Rally” near the White House in Washington, D.C. on Jan. 6, 2021.

Eastman argued in a series of meetings, phone calls and emails beginning the same day that Pence could overturn the election outright when Congress convened to count electoral votes from the states, Jacob has said.

“He came in and said, ‘I’m here asking you to reject the electors,’” Jacob told the committee in February, referring to a Jan. 5 meeting with Eastman. “That’s how he opened at the meeting.”

Eastman later suggested Pence could instead send the votes back to five-to-seven states, according to Jacob. That would buy time to challenge the votes in those states and be easier to sell to the public, Eastman allegedly said.

Pence could take the step even though the outcome was not in dispute among the electors, Jacob recalled Eastman saying.

“Just between us University of Chicago chickens, you and I will understand this is the same basic legal theory underneath it,” Jacob recalled Eastman saying Jan. 5, according to his committee testimony. “It’s just more palatable in terms of the actual claim being made to the public as to what the vice president’s authorities are.”

Short and three former Pence staffers, speaking on condition of anonymity, detailed the events of Jan. 6.

Jacob texted his wife and his pastor as he moved to the Senate floor and then was escorted to the secure location. He also fired off the message to Eastman.

The pair continued to argue about who was to blame for the attack as Jacob hunkered down with Pence, the vice president’s wife Karen, his brother—Republican Rep. Greg Pence (Ind.)—and others for the next six hours until the mob was repelled.

Jacob’s messages to Eastman were more terse and gruff than typical for the buttoned up, veteran attorney. But Short and other Pence staffers also said they reflected the unprecedented nature of the situation.

“I thought he showed a lot of restraint, under the circumstances,” Short said.

Jacob later told the House committee that the 12th Amendment is “not well-drafted” when it comes to explaining how electoral college votes are to be counted.

He also said Eastman acknowledged that no vice president had sought the power to overturn an election as he had suggested in 130 years of precedent, that no Supreme Court justice would buy Eastman’s argument, and that Eastman would oppose the move if a Democratic vice president tried it.

Eastman declined to answer most of the committee’s questions, invoking the Fifth Amendment, after being subpoenaed to appear. He and an attorney representing him in an ongoing lawsuit by the House committee didn’t respond to requests for comment.

“Dr. Eastman’s efforts on behalf of his client were all based on the well-grounded premise that illegality and fraud had occurred,” his lawyer told a court in May, “and that further investigation was essential to determine the true winner of the 2020 election.”

Eastman is one of several Trump-affiliated lawyers Democrats blame for ginning up supporters, including those that stormed the Capitol.

“What happens when a lawyer stirs up a false belief in election fraud and creates propaganda to try to overturn an election?” said Kathleen Clark, a legal ethics professor at Washington University in St. Louis. “You can’t just hide behind your role as a lawyer.”

Former New York Mayor Giuliani had his law license suspended last July after authorities in New York found he made false statements about the election. Giuliani and lawyers Powell and Jenna Ellis have also been subpoenaed by the House committee.

Jacob drafted an op-ed in the weeks after the riot, which was never published and later obtained by the Washington Post. He railed against a “cadre of outside lawyers” who “spun a web of lies and disinformation” in the days and hours leading up to the riot.

He called on state bars to look into whether those attorneys “should be disciplined for using their credentials to sell a stream of snake oil to the most powerful office in the world, wrapped in the guise of a lawyer’s advice.”

Clark and Jan Jacobowitz, a legal ethics advisor in Miami, agreed with Jacob’s analysis. They said lawyers can’t just tell clients what they want to hear, even if he client is Donald Trump.

“If you’re advising anyone, but particularly the highest office in the country, you really have to think about the repercussions of that advice,” Jacobowitz said. “You have an obligation to ensure that the president understands the practical implications.”