Skip to content
Pro- and anti-abortion demonstrators are seen outside the U.S. Supreme Court in Washington, D.C., on December 1, 2021.  File Photo by Tasos Katopodis/UPI | License Photo

The decision opened the door for Republican Attorney General Daniel Cameron to defend the restrictive abortion law after Democratic Gov. Andy Beshear refused to do and lower courts in Kentucky struck down the law.

The law in question restricts a standard second-trimester abortion method known as “dilation and evacuation,” which is typically used after 15 weeks of pregnancy. Lawmakers passed the law in 2018 and it was signed by then-Gov. Matt Bevin, a Republican.

Beshear, a Democrat who took office in 2019, had declined to defend the abortion restriction on appeal. Petitioners took the case to the U.S. Supreme Court. The high court voted 8-1 Thursday to allow Cameron to step in and defend the law.

“Respondents may have hoped that the new governor would appoint a secretary who would give up the defense of [the law], but they had no legally cognizable expectation that the secretary he chose or the newly elected attorney general would do so before all available forms of review had been exhausted,” conservative Justice Samuel Alito wrote for the majority.

Liberal Justice Sonia Sotomayor was the lone dissenter, but her opposition was based on a matter of procedure and not on the legality of abortion itself. She voted in dissent because, she said, Cameron jumped into the process too late.

“Notably, the court’s decision to allow intervention on appeal is without precedent,” Sotomayor wrote.

“Before the court of appeals, the attorney general was able to identify only two instances … in which a federal court of appeals granted a post-decision motion to intervene.”

The Supreme Court is weighing other abortion cases in the current term, including a Mississippi case that seeks to have justices overturn the landmark 1973 decision in Roe vs. Wade, which legalized abortion nationwide. The court will deliver its ruling in that case sometime before its term ends in June.

Kentucky is one of several states that have laws effectively banning abortion if Roe vs. Wade is eventually overturned.

Sat Mar 5 , 2022
President Biden, struggling with low approval ratings after a difficult first year marked by skyrocketing inflation and now Russia’s ongoing invasion of Ukraine, sought in his first State of the Union address to resurrect a domestic policy agenda that would send billions more in federal funding out into states for liberal […] 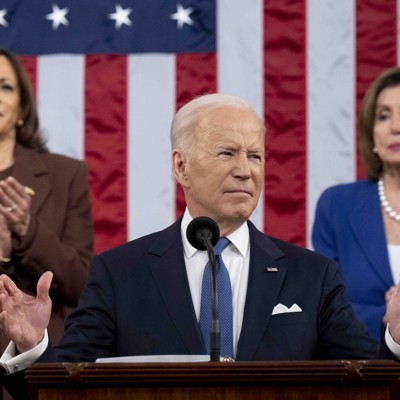