Less than two years after a fierce election fight in California, gig companies like Uber and Lyft are again colliding with labor groups, politicians and the courts over a ballot measure in Massachusetts that would preserve the independent status of drivers for the companies.

The Massachusetts proposition would guarantee workers a minimum wage but limit their access to other benefits offered to regular employees, similar to the ballot measure in California. And as in California, state judges could thwart the multimillion-dollar campaign being waged by gig companies.

A Massachusetts court has questioned whether the gig-work proposition violates state law, and there is a chance the November ballot measure could be thrown out this summer.

The conflict comes as state politicians from Massachusetts and other states ratchet up the pressure on ride-hailing and food-delivery companies while calling for a broader reassessment of whether the gig economy exploits those who work in it.

On Wednesday, five U.S. senators and three members of the House, including several from Massachusetts, sent letters to various gig companies, criticizing them for what the lawmakers say is their practice of misclassifying employees as independent contractors. The lawmakers are also demanding that the companies release detailed reports describing the dangers that drivers face after a report from Gig Workers Rising, an advocacy group, found that at least 50 have been killed on the job in the last five years.

Uber and Lyft have each released reports on assaults and other serious incidents that occurred on their platforms, but the lawmakers, who are asking for a response by June 22, are calling for more details, as well as for companies like DoorDash to do the same. They also wrote that they wanted information about whether the gig companies compensated drivers who were attacked or helped their families with funeral services and other costs.

Lawmakers said a lack of safety for drivers and their independent contractor status were related.

“Drivers are only put at greater risk because they have low pay, low wages, that pushes them to work longer hours and that pushes them to accept more rides, even when they feel unsafe,” Representative Ayanna Pressley, Democrat of Massachusetts, said in an interview.

In a statement, a DoorDash spokeswoman said the letter made “misleading and inaccurate claims.” Instacart said it was “closely reviewing” the letter and would respond. Both companies, as well as Lyft, said they were committed to keeping their drivers safe.

Gig companies spent $200 million fighting for their drivers to be classified as independent contractors in California. The conflict started in 2019 when California passed a law requiring companies like Uber and Lyft to treat their drivers as employees. The state’s attorney general later sued the gig companies to enforce it, and they responded by threatening to leave the state.

The 2020 ballot measure, Proposition 22, passed with about 59 percent of the vote, meaning gig drivers would remain independent contractors. But last year, a California judge threw out the new law. That case is pending an appeal.

Read More About the Gig Economy

Ms. Pressley argued that the Massachusetts ballot measure was a way for gig companies to save money by avoiding giving their drivers more money and benefits like health coverage. “All of this is ultimately a prioritization about profit over people,” she said.

Proponents of the ballot measure say it would instead ensure that workers received a fair minimum wage and some benefits while maintaining drivers’ ability to choose when they worked. Under the proposal, the drivers would make at least $18 per hour while actively delivering food or ferrying passengers.

It would also give limited benefits, like a per-mile fee for vehicle costs, accident insurance, paid sick time and health care stipends for workers who spent a certain number of hours driving. Gig companies would not have to provide unemployment insurance, workers’ compensation, paid time off or any other health care payments.

Conor Yunits, who is leading the Massachusetts Coalition for Independent Work, the campaign in support of the ballot measure, said many drivers did not want to be classified as employees because that would limit their ability to set their own hours.

“It’s about their lives, about having flexibility, the ability to be their own bosses, set their own schedules,” said Mr. Yunits, senior vice president at Issues Management Group. “The fact is, drivers support this. Ultimately, we believe voters will support this.”

Opponents of the ballot measure note that drivers would be compensated at that rate only while completing a task and not while waiting for their next rider. Factoring in that lag time, one study has estimated drivers could make only $5 to $7 per hour. (Mr. Yunits called the study “pure campaign propaganda.”)

Opponents also say drivers should already be receiving benefits given to employees. In 2020, Maura Healey, Massachusetts’ attorney general, sued Uber and Lyft in an effort to force them to recognize their drivers are employees under state law. That lawsuit is pending in court.

If the ballot measure overcomes opposition from prominent unions and politicians in Massachusetts, a staunchly pro-labor state, it could embolden the gig companies to continue their state-by-state approach to codifying their rules for drivers.

“We’re gearing up for the fight,” said Wes McEnany, who leads Massachusetts Is Not for Sale, a campaign opposing the proposal.

The debate could soon be moot. In May, the Massachusetts Supreme Judicial Court heard arguments from a group suing to stop the ballot measure, and expressed concerns that the gig companies were trying to sneak a seemingly unrelated rule past voters.

A section of the proposed ballot measure says drivers are “not an employee or agent” of the gig companies. The measure’s opponents say that means companies like Uber are trying to ensure they cannot be held liable for the actions of their drivers in accidents or crimes.

Under state law, if the court finds that one section of the measure is unrelated to the rest of it — as it indicated it might during the hearing in May — it can throw out the ballot proposal.

Voters “may have totally different views about whether a gig worker should have all these benefits versus whether they can sue the company if there’s an accident or a rape,” Judge Scott Kafker, an associate justice, said during the hearing. “Those are very different issues, aren’t they?”

A lawyer defending the ballot measure argued that those issues both concerned a worker’s relationship with a company and were related.

A court decision is expected in late June or early July. It’s also possible that the State Legislature could pass a law similar to the ballot measure in the coming months, making a vote in November unnecessary, though that prospect appears unlikely.

If the court allows the ballot measure to be put to voters, the proponents could have some advantages. Uber, Lyft, DoorDash and Instacart raised $17.8 million to back the ballot measure last year, according to the state’s Office of Campaign and Political Finance, which hasn’t released totals for 2022. Most of that was a $13 million Lyft contribution in December, which appears to be the largest single political contribution in Massachusetts history.

Massachusetts Is Not for Sale raised less than $1 million last year. The group said it had learned from the California fight that voters could be confused by the minutiae of a complicated ballot measure about independent contractors, so a big focus of the campaign will be arguing that big tech companies are trying to rewrite state laws.

“California had to go first and got caught a little flat-footed,” Mr. McEnany said. “I think we have the hindsight, looking at California and being able to see it coming, we were able to build a coalition a lot earlier.”

Gig companies say they also have drivers on their side. The Massachusetts Coalition for Independent Work cites a survey of about 400 Massachusetts drivers this year, paid for by the gig companies, in which 81 percent backed the ballot measure.

The surveyed drivers were told that a yes vote would classify drivers as independent contractors, rather than employees, and provide new benefits, and that a no vote would maintain the status quo.

Opponents say that drivers are being misled, and that they could both maintain flexible schedules and receive higher pay and benefits if they were classified as employees.

“This half-measure is not enough,” said Senator Edward J. Markey, Democrat of Massachusetts, who signed the letters to gig companies about worker safety. “The answer is to classify these workers as employees and pay them a living wage and give them real benefits.”

Fri Jun 3 , 2022
Happy Summertime! As the weather gets warmer, we hope you are remaining happy and healthy. Please read on below for our coverage of the latest in the legal industry, including new law firm hirings, recent industry awards and partnerships, and women in the legal field.  Law Firm Hiring and Expansion […] 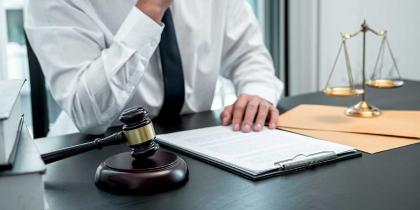